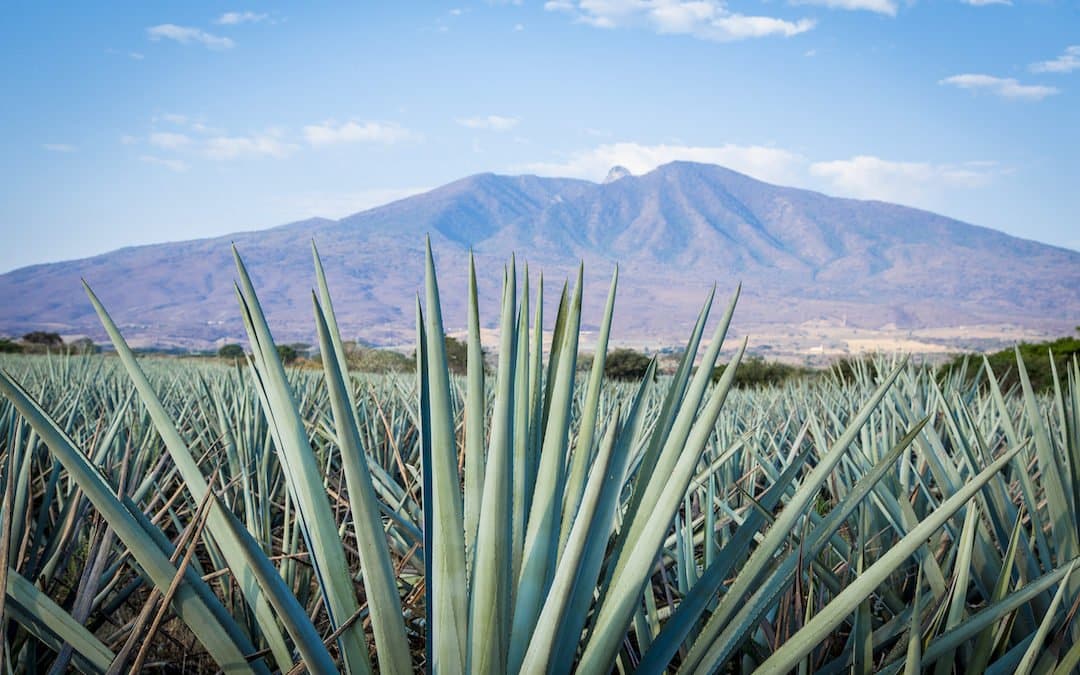 What Is Mezcal & What Is It Made From?

Let me guess, when I say mezcal you think smoke bomb. We’ve all had one too many craft cocktails featuring mezcal that sound delicious, but deliver a smoky BBQ pit in your mouth. Where’s the grapefruit? The thyme? All of those other ingredients that made this drink so appealing to me in the first place?! I hear ya. I’ve had this experience so many times that I honestly started asking bartenders to sub tequila for mezcal in cocktails for a while. And yes, I would get the bartender stink-eye. But I just couldn’t take one more cocktail that tasted like liquid smoke!

Fear no more! I’m here to tell you that I am now a reformed mezcal skeptic and am ready to make you one too. How? By helping you understand this seductive sipping spirit so that you are drinking the quality craft mezcals that do it right. Which means a kiss of smoke versus a full-on assault. In fact, the latter? That’s can often be a fault… meaning those producers are actually screwing up if it’s so smoky that’s all you taste. Like any other spirit, mezcal is nuanced, balanced and complex when done right. So let’s dive in and start creating some new, magical mezcal memories!

What's the Difference Between Tequila & Mezcal?

In our recent article on tequila we talked about something that’s important to refresh our memories on here. The term mezcal derives from the Aztec words for “cooked agave” (metl ixcalli). So technically, any alcohol made from agave is a mezcal. A whiskey comparison may be helpful here. Think of mezcal as whiskey…the parent alcohol category. Then there are the bourbons and scotches and ryes, but at the end of the day they’re all whiskeys. Same thing here. So tequila, raicilla, bacanora, etc…. are all mezcals since they are made from agave plants. Side note: sotol is not a mezcal since, despite it’s similarity to agave spirits, it's actually made from the sotol plant.

When it comes to the mezcal sub-spirits, there are legal definitions. For example, tequila has to be made from only blue agave and can only be produced in 5 designated regions in Mexico. The other spirits have similar designations. This might lead us to think that basically what ends up making it to market as Mezcal is a “leftover” spirit. Basically anything made from agave that doesn’t meet the criteria for other spirits. While, in a sense that’s true, Mezcal does have it’s own broad set of requirements as well.

The Star Of The Show – Agave!

What is Mezcal made from? Today, the most common agave used to make mezcal across regions is agave Espadin. That being said, it can be made from any type of wild or cultivated agave. Some of the other interesting agaves to keep an eye out for in Mezcal are Tepeztate, Tobala, and Arruqueño. These tend to have smaller distribution and are harder to find but they’re totally worth the effort. Honestly there are so many uniquely flavored agave varieties, this is a tasting expedition that could keep you happily sipping for a while! One thing to note: any species of agave used primarily for producing another defined alcohol that’s recognized by Mexican law cannot be used to make mezcal. For example, you can’t call something mezcal if it’s made from only blue agave. Because, you know, legally that's called tequila.

To be sold legally and obtain the NOM stamp of authenticity mezcal must be produced in one of the 9 legally recognized Mexican states. For you globe-trotters out there, the 9 states are Oaxaca, Guerrero, Michoacán, Puebla, Durango, San Luís Potosí, Zacatecas, Guanajuato, and Tamaulipas.

Keep in mind that while the NOM stamp is important to ensure you’re actually drinking mezcal (made from agave in one of these 9 states and following certain production practices) it is no indicator of quality or craftsmanship. For a good overview of what having a NOM certification really means and the different classifications of mezcal vs. mezcal artesanal vs. mezcal ancestral check out this post from Mezcal Vago.

These regional and agave style differences are vast and one of the many things that make mezcal so fun to explore. The one commonality in what makes truly amazing mezcal, however, is the process. When we talk about process it’s important that we distinguish between the centuries old, artisanal process and the modern-day industrial process. It’s important to make this distinction because with this spirit, almost more than others, you can really taste the difference. Let’s jump into the magic of the traditional, centuries old production processes (designated as mezcal artesanal or mezcal ancestral on the label) first…

How Mezcal is Made

The OGs of Mezcal

Traditionally, mezcal is made by small-scale production houses, called, fábricas or palenques. Each house has its own set of production methods, some of which have been passed down for generations. This is where the art of the craft really shines through. The overall production method starts with the heart of the agave plant, or piña.

After harvest, the piñas are cooked for 3-4 days in earthen pits or above ground masonry ovens. This is where that smoky characteristic you know and love comes into play.

The juice is extracted with a wooden mallet, large stone mill or other traditional milling approach. These mills are often pulled by livestock or a tractor. Next, the juice is fermented in open in-ground pits, rock pits, tree trunks, clay urns, wooden vats or animal hide. Since these vessels are open, traditionally mezcals are all produced using spontaneous fermentation, meaning there is no added yeast. They're simply allowing the fermentation to happen in open containers with the yeasts native to that area doing their work. You’re starting to see where the magic comes from, aren’t you?

The fermented liquid is distilled in a direct fire still, where the boiler must be made of either copper or clay. The head of the still has a few other material options, like wood and stainless steel depending on the designation. At this distillation phase, mezcal can be flavored with the essence of herbs, fruit or even larvae. Then there’s even more distinct pechuga process. Pechuga is a mezcal that is distilled with herbs or fruit and a raw chicken or turkey breast hanging over the still. This essentially cooks the breast in the distillation vapors and adds a special essence to the final spirit.

The majority of mezcals are consumed young, straight from distillation, with little to no aging. This is more traditional, although barrel aging in wood, similar to other spirits is not uncommon. Honestly, some of the barrel-aged mezcals I’ve tasted could challenge some of the best whiskeys I’ve had. The smokiness really mellows out and can, at times, almost disappear with barrel aging.

Modern Is Not Always Better

Ok, so that sums up the more traditional approach to mezcal. What’s going on industrially that’s different? While some of these may still have a NOM designation they wouldn't be classified as artesanal or ancestral due to the following process differences.

For starters the bigger operations usually cook the agave in autoclaves (kind of like big pressure cookers) or diffusers instead of roasting. So where’s the smokiness coming from then? Got me. They also usually add yeast to speed up fermentation and extract/control for certain flavors.

Then, they typically distill their mezcal in the more efficient column stills. For a quick refresher, column stills are known to make much purer alcohol, which sounds good. The downside of this is vastly reduced flavor and texture subtleties that you want in most spirits. For a point of comparison, vodka is almost always made in column stills which is why it has come to be known for its flavorless profile. At least until the craft revolution got a hold of it! Lastly, many industrial distillers add artificial ingredients to adjust the color or flavor of the final product. Oh, wait… that must be where the smoke flavor comes from! Yeah, no thanks.

So What's With The Smoke Bombs?

So let’s go back to that idea that a hit-you-in-the-face smoky mezcal is likely a production flaw. Honestly, it might be from these artificial flavorings just mentioned, as well. But when it comes to the production process different Mexican artisan distillers have explained the idea of this flaw to me. So when you get that overly smoky flavor it often means the distiller, even if artisan, isn’t being careful enough with ensuring there’s no overlap between production stages. The stills are either located too closely to the roasting pit or there are particularly strong winds pushing the smoke toward your still. This means the spirit dripping off the still is getting bathed in a second round of smoke before bottling. No bueno.

While technically a flaw, these super-smoky mezcals probably found a welcome market in our American palettes that desire bigger, bolder flavors. Hence the flood of crazy, smoky mezcals we saw so much of as mezcal first started to get big here. Which, to be fair, some people really do like. As a producer, you  would much rather make some money off your imperfect Mezcal than trash it. Unfortunately it has created a bit of a vicious cycle and a lot of misperceptions about mezcal with American consumers.

Time To Get Sipping…

Hopefully we’ve busted some of those misperceptions today and you’re ready to go out there and start sipping some well-balanced craft mezcals. To get you started I’d suggest Los Amantes and El Jolgorio as great expressions of what we've been discussing here. El Vago, who I mentioned earlier, also exports some really great traditional mezcals. If you can’t find any of those in your area head on over to visit our friends at mezcalreviews.com for a little guidance. For such a newly popular spirit they have one of the best review sites out there with over 400 bottles in their catalog. It’s a hard job to drink and rate all that mezcal, but someone’s gotta do it and we’re grateful they’ve taken up the task.

Of course, please let us know what you’re finding and loving out there so we can sip it ourselves! As they say in Oaxaca, “Para todo mal mezcal, y para todo bien, también.” For everything bad mezcal, and for everything good too…

Interested in getting your own craft alcohol story or consumer education piece featured on The Crafty Cask? Click here.