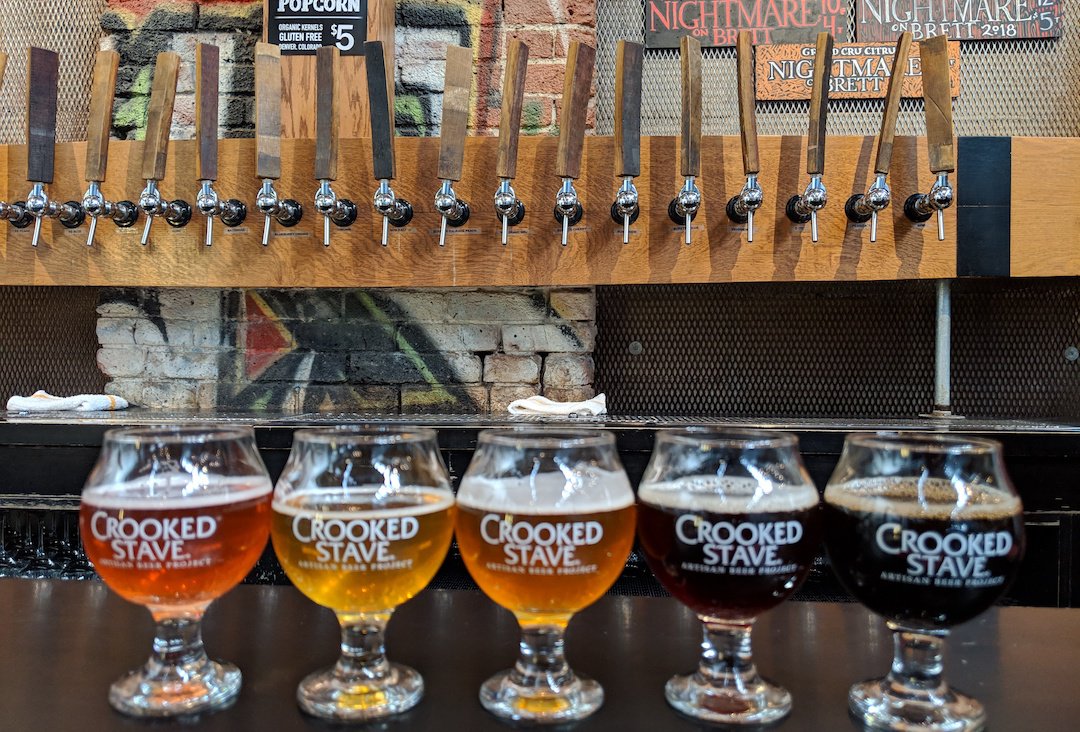 Oooooh, do I have a sour beer treat for you, Tippler Nation! I just got to Denver and I think I may have already hit one of my highlights of this two week trip. The very first stop I made on my very first day here, in fact. Welcome to the tasting room of Crooked Stave Artisan Beer Project.

I've shared a lot with you about sour beer over the years with our continually growing sour beer series and one of my favorite parts of that series is when I get to tell you all about amazing producers making unique, delicious sour beers I think you should try. Crooked Stave Brewery, in my opinion, might be the best sour beer brand out there and while I was excited to try it myself I'm even more excited to share my experience with all of you. So…bold statement. Why do I think Crooked Stave Brewery could be the best sour beer brand in the country? Let me count the ways…

Owner, brewmaster Chad Yakobson quite literally wrote his master's thesis on the brettanomyces yeast species. He started his craft alcohol career in the wine industry where, funnily enough, brettanomyces is avoided like the plague. Throughout his wine career, which included becoming a sommelier, he found himself appreciating brettanomyces as he relaxed with industry friends over Belgian beers, Lambics, Guezues, and more. How could this yeast strain, so feared and loathed in wine, be so important and result in such uniquely different flavors in beer? His intrigue led to passion which led to a realization that he needed to return to his native Colorado to dive into this more deeply. And wow, am I glad that he did!

And, no, Chad clearly isn't the kind of guy who is just going to go home and play around. He was serious. After studying at the International Centre for Brewing and Distilling in Edinburgh, Scotland he wrote his dissertation on an open-source website which ultimately became The Brettanomyces Project. Yeah…if you want to start getting into sour beers you're in good hands with this guy!

While sitting in the tasting room and talking about Crooked Stave's approach I was told, "we're in it for the long dime, not the quick nickel." It was in response to my questions about their long aging times (at least a year for most of their beers!), multiple fermentations and otherwise highly involved approach to most of their beers. So many breweries today pride themselves on cranking out as many new beers as quickly as possible and while Crooked Stave is certainly prolific as well they take the long view and slow road to get there. It's noticeable in the very first sip.

How? Honestly, sour beers are so hot right now and so many people are cranking them out but for the most part they tend to be relatively one note. Want to guess what that note is? Sour! Whereas the Crooked Stave Brewery team actually prefers to call their beers wild beers when you really get them talking. Because when done right, sour should only be one of many notes and highlights in a beer. Not the whole flavor profile.

They're also big believers in creating wild beers that cross the entire spectrum of sour. From barely-there slight sours to punch you in the face and make you pucker. Delightfully, the latter are more rare. To get their complex, layered flavors they use a variety of barrels for aging (tawny port, white burgundy that then aged gin before aging their beer, whiskey, etc…) and high quality fruits, herbs and other infusions. Each beer I tried had a unique personality, depth of flavor and kept me reaching for more. Honestly, the biggest problem I had was choosing which sours to try and not being able to enjoy more! Speaking of…

Sour Beer Styles For Everyone

So for a brewery who takes the long view and puts such effort and attention to detail into each beer WOW do they have an expansive selection. At the Denver tasting room there were 23 beers on the menu (5 were non-sours) PLUS 19 vintage bottles available for in-house consumption. They also carry a few gluten free hard kombuchas and beers (yay for one of my favorites – Ghostfish beer out of Seattle!).

Unfortunately I was there solo, so I could only try so many and with each one being so refreshingly unique it was hard to choose. But here's where I landed:

Sour Rosé – this is their flagship beer and a GREAT place to start. Also a fantastic choice for anyone who thinks they don't like sours since it's light, fresh and only ever so slightly sour. It's a wild ale fermented in oak with Washington raspberries and blueberries that were used previously in other batches of Crooked Stave beers. That last part is key since it helps the fruit just kiss the beer with flavor vs. overpower it.

L’Brett D’Or – this is their surreal golden sour ale aged in oak barrels. It's spontaneously fermented with the yeast that natively resides around their coolship (yup! Similar to the other top sour beer brand out there, OEC, they have a coolship). This one has no fruited but it is the base beer used for a lot of their other fruited beers. See? layers of complexity

Batonnage – This is a fun, funky one! Over the years it looks as though Battonage has come in and out of retirement with different resulting beers each time. Perhaps why it's not on the website? It's named after a winemaking process that Chad applies to this beer. Essentially continuing to stir the lees as the beer is barrel aging. This version of battonage is their wild sage saison (um, yeah – that one is incredible on it's own too) that is then aged in white burgundy wine barrels that also once had Ransom Old Tom gin in them. Let's recap: sage saison + white burgundy aging + gin aging. This beer is botanical, fresh with almost a hint of eucalyptus all underlined by some slight funk.

Origins – This is another one of Chad's nod to his winemaking days and one of the first sour beers he fell for…La Folie. It's a Burgundy Sour Ale Aged in large oak foeders and then smaller wine casks. This is your middle of the road sour on the scale and it's also another base beer for the Mama Bear series.

Mama Bear – this is a special series that uses the origins burgundy sour ale base with other cool things added. Like when I was there, blueberries. Ready for some layers of complexity and dedication to the craft? Get this:

The blueberry origins goes through 6 fermentations and is then finished in tawny port barrels. So it's the origins burgunday sour base which was fermented in steel, then again in old red wine foeders that are managed in the solera style before then moving to smaller wine casks, a fruiting vessel, another wine barrel and then finally finished in tawny port barrels. I mean, what in the good hell?! Just try to imagine how rad that beer tastes! Yes, I just used the word rad. I just don't know what else to call it.

Nightmare on Brett – this is a dark sour friends! And another base beer for many of their fruited sours, but before we get to that. This one moves us a bit away from the world of wine. First aged in large oak foeders it then moves to local legend Leopold Bros. bourbon and whiskey barrels for the finishing touches.

On it's own this has a tart bite, but the fruited version I tried? Raspberry? YOWZA! This is the punch you in the face and pucker up beer of the bunch. Yet still I was going back for a third, fourth and fifth sip. It's like that too spicy food that's making you cry yet you still keep sticking your fork in for more. Beautifully done Chad, beautifully done.

Get Yourself Over to Crooked Stave Brewery

So I know, this isn't my typical well thought out and perfectly researched producer feature article. But you know…sometimes you're just so struck by a place you have to share your stream of consciousness immediately. That's what Crooked Stave Brewery inspired.

And this is why I love The Crafty Cask…because it allows me to be comfortable saying I'm NOT a beer expert or a spirits expert or a cider expert or any other expert. I'm a craft booze explorer and exploring requires that you not already know everything about it. So that you can be surprised. Be caught unexpected and off guard. I'm glad I didn't have time to research the hell out of the Denver craft booze scene so that I could feel like I was the very first person discovering a gem like Crooked Stave Brewery. I hope you make it there someday so you can discover it too.

psssst. They have their own distribution company and they're distributed in over 20 states. So, YES! You might actually be able to find some near you to try!