Back to the Future: A History of Concrete In Argentinean Winemaking 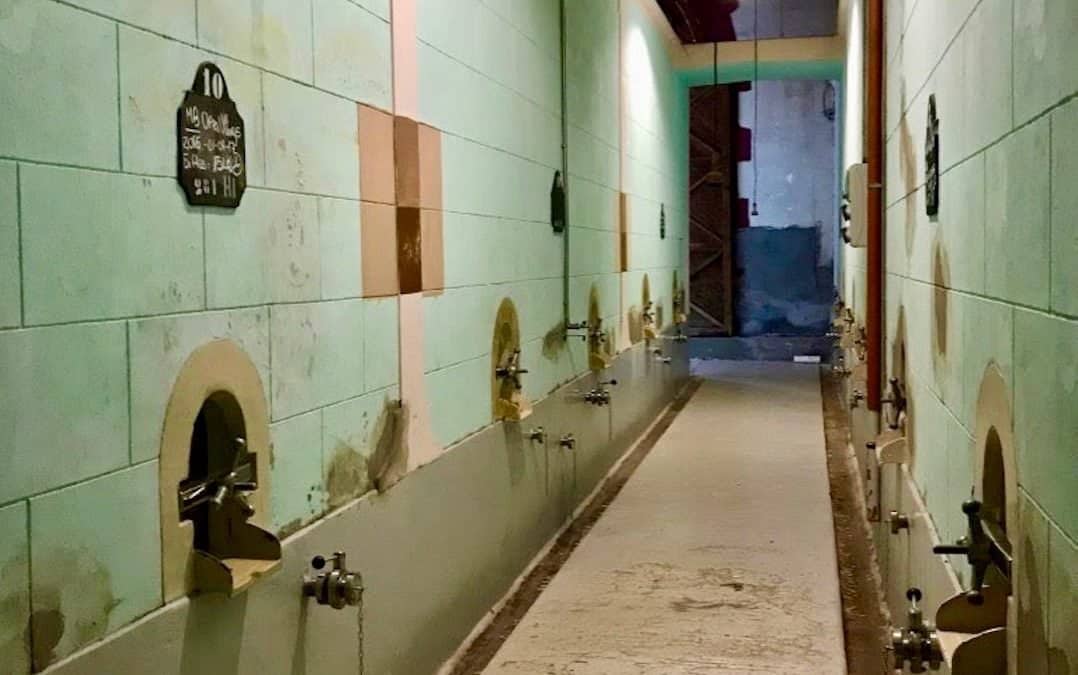 Part 4 of a 6 part series on Mendoza, Argentina

Concrete Tanks for Winemaking in Argentina

Concrete eggs are all the rage in winemaking these days…particularly in the United States where it’s a newer phenomenon and still not widely seen. While that may lead many of us to believe it’s a newer innovation in winemaking, the use of concrete tanks for winemaking has actually been going on for centuries in old world winemaking regions. And that includes Argentina, where I got to see their concrete tanks (not eggs!) up close and learn all about them on my recent visit to beautiful Mendoza.

Ok, ok…you’re like, so what? You got to see some of these concrete tanks for winemaking. I bet you like looking at dirt too (funny thing about that – stay tuned for our 6th article in this series, because yes, yes I do!). But look at them! Full, huge walls of concrete tanks for wine fermentation and aging. I’ve certainly never seen anything like this and I was excited to learn more. And leave it to Argentina to have a fascinating story to go along with the concrete. One of the things I love about this country…nothing is ever as it seems!

Ahead of the Curve or Behind the Times?

One would think that since this is how Argentina has been making wine for centuries, in their giant concrete tanks, that perhaps they were ahead of the game in the more recent concrete winemaking revolution. Not so fast! You see their concrete tanks, unlike the smaller concrete vessels gaining popularity today, were so huge that they were incredibly hard to clean and maintain. In fact, the doors to the concrete tanks were built so small that they had to send children into them to do the grueling cleaning and repair work.

Yup, you heard that right…no child labor laws back then, clearly. To make matters worse, as you can imagine, there were some pretty toxic fumes that would build up in these tanks so this job could be deadly if they didn’t air the tanks out enough or limit the time of said-child’s work shift properly.  Yikes.  Yeah, pretty happy you weren’t a kid of a winemaker in the early winemaking days of Mendoza right about now, aren’t you?

Now, the kids did the best they could. And I’m sure there were some additional cleaning/maintaining innovations over the years as well. But the concrete tanks weren’t holding up all that well over time and there wasn’t a lot of extra money lying around to completely replace or repair them. Functional? Yes. Ideal for high quality wine? No. Ah, the puzzle pieces are starting to fit together…if you haven’t already, take a gander at our 3rd article in this Mendoza series where we talk about the poor quality of Argentina wine in the early days.

So these concrete tanks actually started to fall out of use and the now more prevalent stainless steel and oak vessels started to get brought in. Much easier to clean and maintain…and the rest of the world seemed pretty happy with them, so why not Argentina? Some wineries converted their old concrete tanks into barrel rooms for storage and aging…and while some doors are now a bit bigger, you still have to be almost child-sized to get in and out!

Fast forward to the 1990s or so when winemakers from all over the world started taking interest in making wine in Argentina given to their abundant natural resources (yet perplexingly sub-par wine quality – again, check out that  story here.). Many of them see these vast concrete tanks in disrepair, often unused, and set out to get them functional again. The easiest, cheapest way to do that? Line them with epoxy. The harder way to do it? Painstakingly refill the cracks with concrete, give it a tartaric acid wash and keep up the repair ongoing.

Not surprisingly, most went for door #1. While I know epoxy touching your wine sounds yucky…it’s actually not all that uncommon, even in concrete eggs here in the states. In reality it kind of just turns the concrete vessel into something more similar to a stainless steel vessel since it seals off the concrete entirely. Which defeats many of the benefits of using concrete in the first place, but it’s still a better solution than using them in disrepair or abandoning them entirely.

A Portfolio of Winemaking Tools

Current day in Argentina – we’re seeing a great mix of the refurbished concrete tanks, stainless steel tanks, oak barrels, and wait for it…concrete eggs and other smaller concrete vessels. Wait, what? Why? They already have plenty of concrete! Well – they’re easier to clean and maintain, as we’ve said, for one. But the various shapes they now come in also have unique benefits and their smaller sizes allow for more control and experimentation.

The great Argentinean winemakers respect and value the historical benefits of concrete but appreciate the innovations available to them today. Which is, in part, why we’re seeing more and more amazing wines come out of Argentina. With more tools and techniques available to them they’re able to make wines that compete on a global scale. Which we’re pretty damn happy about…but we also love the journey that it took to get there, including these incredible concrete tanks!

As we end our journey through the concrete tanks of past, present and future…are you ready for more on Argentina? Check out the rest of this 6 part series here. And as always, we’d love to hear your thoughts, comments and questions on the topic of concrete tanks in Argentinean winemaking here!