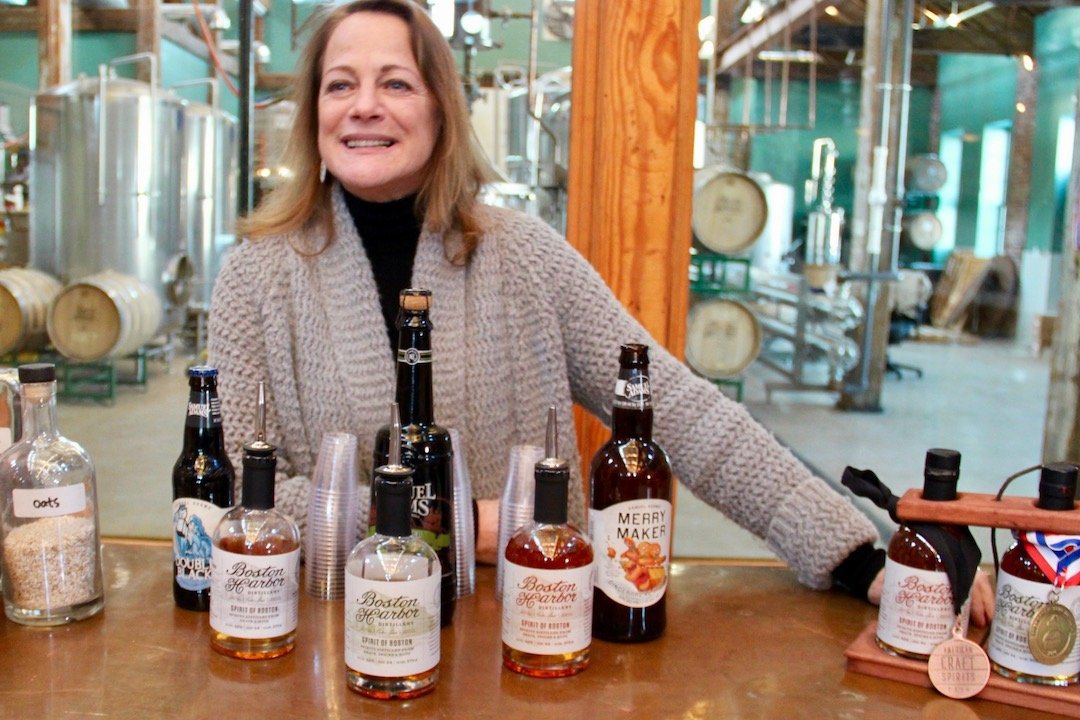 When I went to Boston Harbor Distillery, it was frigid and New England was cleaning up from its first major snow storm of the year.  I would say a perfect time to warm-up with excellent spirits. For the history buffs who want good spirits with a twist, look no further than this place!

A Little Taste of History…

Boston Harbor Distillery is in the Dorchester neighborhood of Boston and sits in the Port of Boston Harbor.  The distillery is in a renovated commercial center that dates back to the 1800s with former tenants who made amazing things. All the things! In this very building Silas Putnam invented the hot-forged horse nail and was a main supplier in the Civil War; George Lawley & Son Shipyard built winning yachts for America’s Cup, and Seymour’s Ice Cream factory was a local, more recent favorite. From war materials to racing ships to ice cream to craft spirits? It's a pretty amazing place…and you feel it from the very minute you step inside.

The space is cozy and pays homage to Boston's history with a myriad of old city maps and photographs.  Fun fact: the one copper still Boston Harbor Distillery uses for distillation is still #1776 from the producer…the very year the U.S. became a country.  How crazy is that given Boston's importance during that time?! The building's legacy and those who worked there also live on in the names of the spirits made at the distillery such as Putnam New England Rye Whiskey and Lawley’s Small Batch Rum.

Boston Harbor Distillery was founded by Rhonda Kallman, who was hire #2 at Boston Beer Company…you know that little beer company that created Sam Adams? She has been a key and highly respected player in the craft beer scene for over 25 years, but as much as she loved being at the forefront of the U.S. craft beer movement she had a little (not-so-secret) secret. She would tell you her heart was always with whiskey. Do you blame her?! So here we are…back at her first love.

The Spirits of Boston

To recommend a spirit from the distillery is difficult.  In fact, my bank account took quite a hit after my trip here!  On my shelf currently is a bottle of Putnam New England Rye Whiskey, which has a beautiful balance of pepper, spices, and vanilla, but a surprisingly smooth finish. When I’m hiking with friends, we put this in flasks to keep warm as we ascend Mount Pierce in the White Mountains of New Hampshire.  I also have a bottle of Boston Harbor Maple Cream Liqueur that features a blend of Wisconsin cream, rum, and New England maple syrup.  I drink this as a decadent after dinner drink or with coffee.

But perhaps my favorite beverage is one from their line called the Spirit of Boston, award-winning distilled beverages made from Samuel Adams beer.  That’s right, Sam Adams beer!  Let me explain… normally whiskey is distilled with water and grains (here's a quick refresher on how whiskey is made). Boston Harbor Distillery takes it a step further and distills beer which includes grains, spices, and hops…simply because finished beers, like Sam Adams often have hops and other natural additives. So if you're using a finished beer to make a spirit that's what you're starting with! Because of these extra ingredients, we can't legally call this whiskey but essentially that's what it is. So if you see bottles that say things like "spirit distilled from grain & hops" now you know what we're talking about.  Silly lawyers!

Another way to think of this is that The Spirit of Boston is a line of distilled beer.  On our visit there were distilled beers (whiskies) made from Double Black Lager, Thirteenth Hour Stout, a New World Tripel, and my favorite, Merry Maker Gingerbread Stout (aka Christmas in my mouth).  Boston Harbor Distillery is really excited to release a new distilled beer made from Sam Adams Ella Blanc India Pale Ale Lager, which already received a silver medal from the American Distilling Institute.  I tried it when I was there. Believe me, it’s great!

Now, at first glance and to some hard-core whiskey connoisseurs we understand that this newer "distilled beer" trend (read another article here about a CA distillery doing this) might feel a little strange or gimmicky. But hold your judgment until you try them…especially if you love beer. These are the perfect beer lovers whiskey. They absolutely drink like some of the best whiskey out there, but if you know your Sam Adams beer (and I do!) you can actually pick up hints of that beer and it's essence on the back note. They're really incredible and definitely a conversation starter. And as we said, Boston Harbor Distillery's more straight forward Putnam Rye Whiskey is a knockout as well for you purists!

So if you’re in Boston and want to taste, touch and learn about the essence of the city: a blend of tradition and revolution; classic and contemporary; and simply the future of distillation we only have one thing to say. You. Must. Come. Here. Insider tip: plan to stick around after your tasting and get a few cocktails…don't rush through this visit. Their cocktails are super unique, delicious and will teach you how to use your fun new purchases (um, yeah…you're not getting out of here without a purchase) at home. I was a big fan of the the Triple Deck'ah…like a fun play on a White Russian with their maple cream and rum!

Have you already been? Tried their spirits? Are you planning to go? Share your experiences with us here and of course, don't forget to tag us on Instagram…this place is prime for the gorgeous IG shots! Have some opinions about the distilled beer trend? Lay 'em on us!