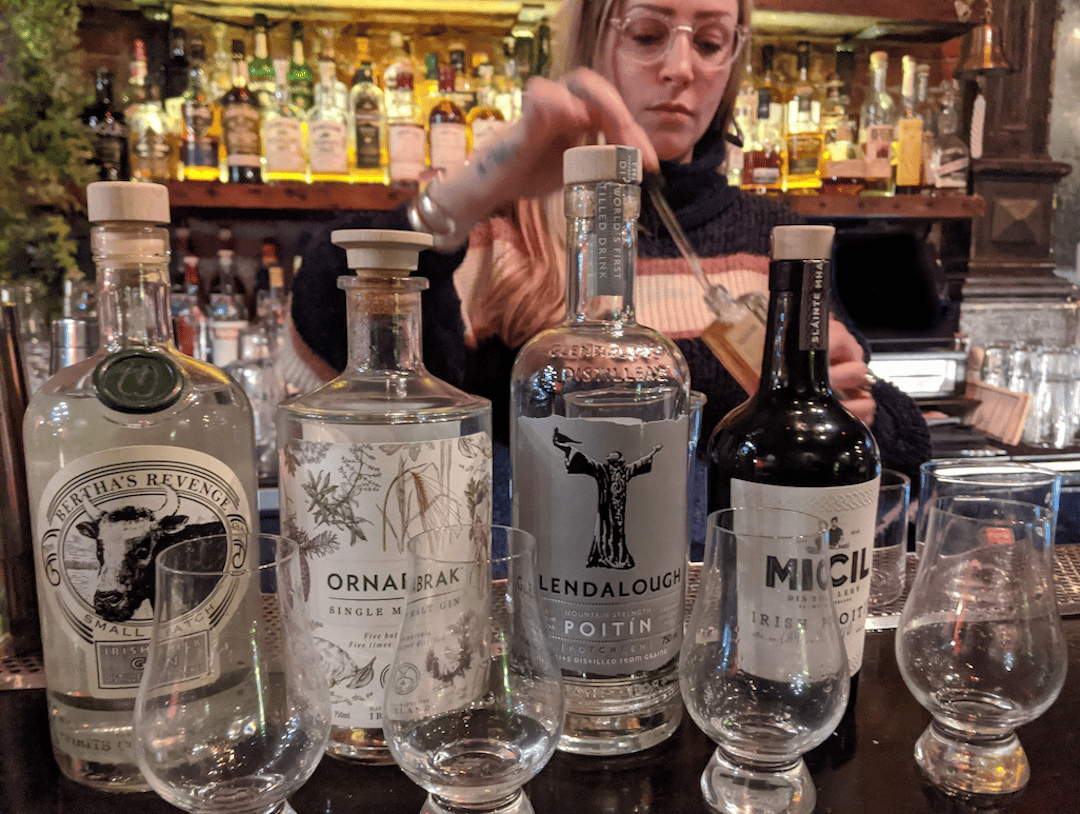 We’ve been traveling to Ireland for 15 years, and each time we go, we see more and more brands of Irish whiskey and gin. We are excited by the selection, the stories, and the craft behind them. More of that selection is coming stateside too, so this St. Patrick’s Day, we decided to showcase some of the great bottles that we’ve discovered to help inspire a more crafty and, ahem, classy St. Patrick's Day drinks celebration here in the states.

Some we found through recommendations from friends and retailers in Ireland. Others we found through a fortuitous encounter with an Irish spirits guide, Gillian Fitzgerald, who is a co-founder of San Francisco’s Casements Bar. This modern Irish cocktail bar has a large selection of beer, whiskey and gin from Ireland. It’s named after Roger Casement, a diplomat, activist, and all-round rebel. (It’s a long story.)

Seeing as it’s St Patrick’s Day, we asked Fitzgerald what makes an Irish bar so popular worldwide. Everywhere you go, from Central America to Africa, people seem to love Irish bars. But why?

That certainly was our experience. We learned more than we could ever cover here. So the next time, you’re at a bar or craft liquor store, look beyond the Guinness and Jamesons and ask for something new from Ireland. Or if you're in San Francisco head on over to Casemenets Bar for your St. Patrick's Day drinks and fun. We’d love to hear what you find. In the meantime, here’s a peek at some favorites from our journey.

The Shedd Distillery Where to Buy: wine.com ($38)

We picked this up at Duty Free at the Dublin airport and love the martinis we make with it. St. Patrick's Day martinis? Yes, please! Drumshanbo Gunpowder Irish Gin is the liquid embodiment of thinking global, acting local. Shedd Distillery is located in rural County Leitrim in north central Ireland, but its spice-forward flavor is from twelve types of botanicals inspired by distiller PJ Rigney’s trips around the world. They include the local-to-Leitrim meadowsweet, cardamom, star anise, orris root and more. The Gunpowder in the name refers to Chinese Gunpowder tea.

Rigney is a beverage industry veteran. He’s worked on big global spirits brands such as Baileys, but he set up his own distillery to experiment with gin, whiskey and vodka. And if that’s not enough to keep the cocktail chatter going, you can discuss the jackalope on the label.

Ireland will always be known for dairy, so if you’re a distillery, why not hitch your wagon to Ireland’s most famous cow. That’s what Ballyvolane House Spirits Company did when they named their gin after Big Bertha, who lived to nearly 49, gave birth to 39 calves and made the Guinness Book of Records.

But Bertha’s Revenge is more than just a name. The alcohol is made from whey, a byproduct of the local dairy farming of County Cork. Truly “grass to glass,” this approach gives Bertha’s Revenge some eco-cred and a smooth feel on the tongue. And to this foundation, they add 18 ingredients, including cardamon, cinnamon, cloves, licorice, and a variety of citrus. We tasted Big Bertha at Casements, which uses it in a cocktail that’s a twist on a negroni, although we drank it straight.

West Cork Distillers is one of Ireland’s biggest distilleries, making a nice assortment of whiskey, gin and vodka. They sell whiskey in almost 70 countries and make private-label spirits for some big names like the grocery behemoth Lidl and esteemed Irish radio star Graham Norton.

But big can be craft too. West Cork Distillers retains their values from their roots as three guys — two fishermen and a food scientist — making their own booze in handbuilt stills. Most of the staff is in West Cork. They are a wholly Irish owned distillery, having recently bought back a stake from U.K. beverage company Halewood Group.

If you’re new to their whiskey, they suggest starting with the Black Reserve (Black Cask in Europe) blend of malt and grain whiskey. It’s finished in heavily-charred bourbon casks. The result is a smoky flavor that also has some vanilla and sweetness to it. When you’re ready for another bottle, perhaps after the St. Patrick's Day drinks have been enjoyed, try their aged 8- and 10-year single malts.

Dingle Distillery Where to Buy: Wine.com ($109)

“They are obsessed with whiskey,” says Casements’ Fitzgerald about Dingle Distillery.

This family-owned company, located on Ireland’s west coast, won the 2019 award for World’s Best London Dry Gin, but it’s their whiskey that’s credited for the birth of a movement. In the mid-90s, three entrepreneurs — two from Ireland’s craft brew pub business — decided to take on big whiskey and build a small distillery in Dingle. They funded their small-batch whiskey through a “Founding Fathers” program, where one could invest in one of 500 casks and have some say in the distillation of it. Batch 1 whiskey was released in 2016, and a variety of whiskies are now available worldwide.

Now that we’ve covered whiskey and gin, we’re moving on to moonshine as a lesser known St. Patrick's Day Drink. Or rather, the Irish version of moonshine, a traditional spirit called Poitín (pronounced PUUT-cheen). Hundreds of years old, it was made at home in a pot. It was legal, then it wasn’t, and now it’s back. Some would consider high-end poitín an oxymoron, but after tasting Glendalough’s poitín at Casements, we’re good with being conflicted. It was enjoyable on its own, and would be good in a cocktail too.

In the Wicklow mountains in the east of Ireland, Glendalough is famous for its lakes, wooded scenery and monastic history. St. Kevin, who graces Glendalough Distillery’s bottles, founded Glendalough in the sixth century. The distillery is proud to employ a full-time forager who finds the botanicals for its Wild Botanical Gin and other seasonal botanical gins. We picked up the Autumn gin in Ireland, and the martini we made would be perfect for glamping. You can order the seasonal gins directly from the distillery’s website.

You’ll find a spirits renaissance in Ireland these days, and if you drink enough poitín, maybe you’ll find a spiritual one too. We’d love to give a nod to the poitín made by the Micil distillery as well. It’s so smooth, it’s slick, but you’ll have to go to Ireland to get a bottle of this one. Tempting, isn’t it?

Whatever you choose to celebrate the Irish culture and history on this St. Patrick's Day, we'd love to hear about your favorite craft spirits, beers, or other Irish tipples in the comments below. And if what you're drinking inspires another trip to the Emerald Isle ourselves I guess we'll have to take one for the team. Happy St. Patrick's Day Tippler Nation.