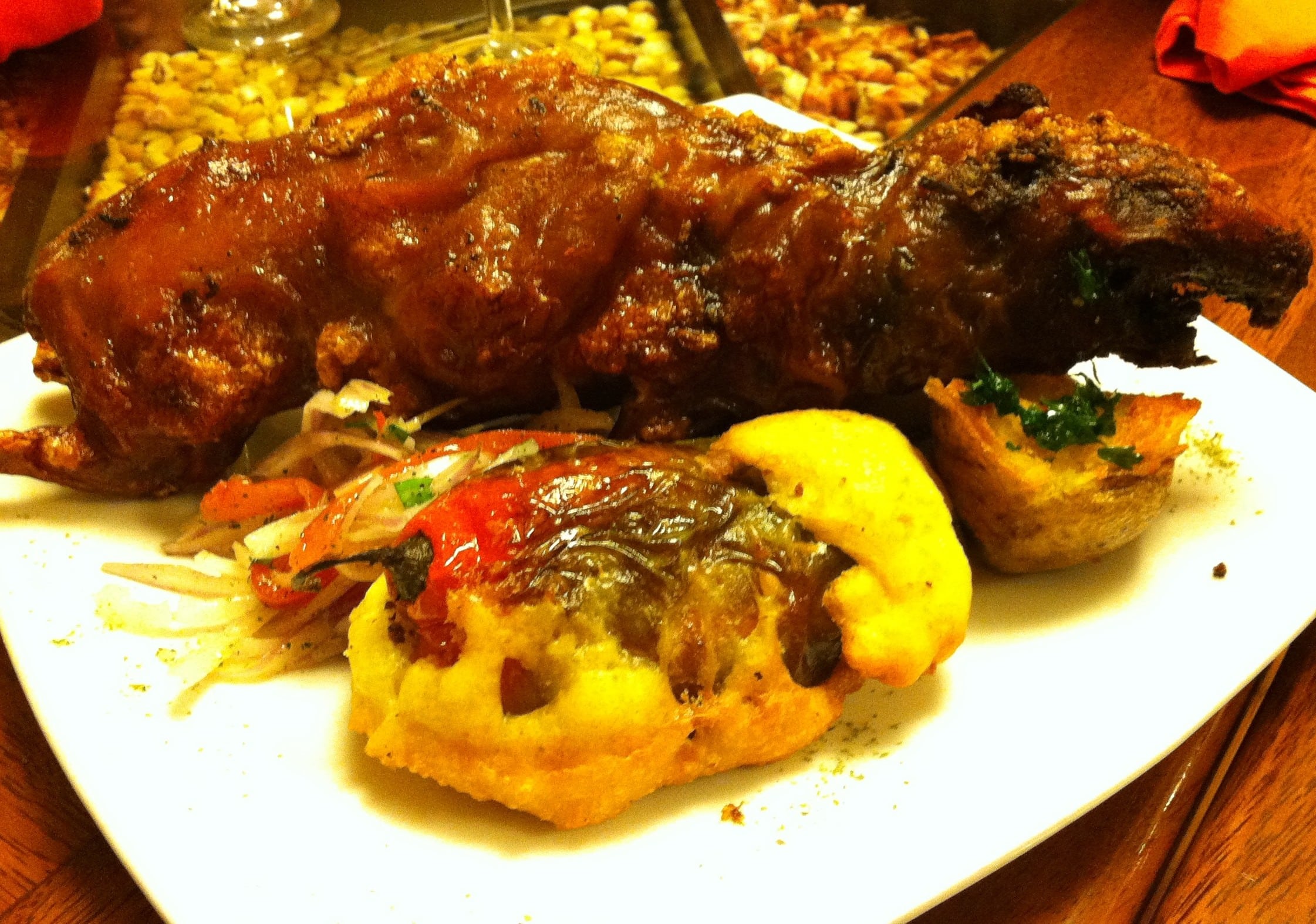 One of the first things everyone asked me when I returned home from Peru was if I tried Guinea Pig, or Cuy Chactado.  As you can see by the picture above, the answer is yes.  Now before you get all bent out of shape thinking about the cute little guinea pig you had as a pet as a child you have to understand the perspective of someone like me who’s passion is to explore new cultures through food.

Guinea Pig has a different meaning to Peruvians, particularly in the highlands.  It’s not only an important source of protein, particularly in rural areas, but the guinea pig also holds a longstanding and meaningful place in Peruvian folk medicine and religious practices historically.  There’s even an Indian version of the Last Supper on display in Cusco that shows Jesus and the 12 disciples feasting on this local delicacy. Not trying guinea pig while in Peru would be like going to Texas and not trying authentic BBQ or going to Thailand and not trying some insects…blasphemous to a food explorer like me!

So, did we see a few live guinea pigs running around while in Peru?  Yup…but honestly I never had one as a pet and always considered them less cute and more of a rodent so it didn’t bother me too much.  I’m also an unapologetic omnivore, so I don’t tend to get squeamish about eating animals…even if thy happen to be cute.  But as you can see below, when they’re stripped of their fur and ready for sale at the San Pedro market in Cusco all of a sudden they start looking a lot more like a meal and less like a pet.

Now, on to the important matter…so, how does guinea pig taste?!  Before we get to the slightly scarier guinea pig meal pictured at the beginning of this post, let’s talk about the very first guinea pig dish I tried while in Peru at one of the top 50 restaurants in the world, Astrid y Gaston, Lima:

This guinea pig dish, was absolutley delicious.  Incredibly rich, but delicious.  Unlike the more traditional, rural preparation this was completely de-boned with each crispy little roll having tender guinea pig meat wrapped inside.  The meat reminded me a lot of dark Turkey meat, although I’ve heard others say Rabbit.  The skin, in this preparation reminded me a lot of Peking Duck skin…yeah, yum.  In the center, you have a strained version of Carapulcra…a dried potato and lentil stew and a play on an egg roll filled with Carapulcra and guinea pig meat.  The little bit of greens and radish helped lighten the dish up a bit, but the pot of Carapulcra that came on the side almost stole the show.  That lentil and potato stew had a depth of flavor that was shocking for such basic ingredients.  I’m going to have to look up a recipe for that dish!  So all in all, I thought this dish was amazing…which was to be expected from Astrid y Gaston.

The second and last time I had guinea pig was what you see in that very first photo…you know, the one that gets people all riled up since it’s served still looking like a guinea pig.  This is also the more traditional preparation of the dish…fried up or roasted whole and left for the consumer to pick apart with their hands and utensils.  Kind of like when you’re served a whole fish.  It is also traditionally served with rocoto relleno, or a stuffed pepper, as you can see.  A friend of ours at dinner actually ordered this dish, but was kind enough to share with the table since it was a bit of an event!  It’s certainly quite a bit more work for not very much meat….and if I’m being completely honest this meat didn’t taste quite as good.  For some reason I kept picking up a bit of a Sardine flavor, not what you’re looking for out of your meat.

So after trying guinea pig twice while in Peru, I come out split.  The high-end version? Fabulous.  The lower-end, more traditional version? Not great, especially for the amount of work you have to put in.  So I suggest you try it for yourself if you find yourself in Peru…and when you do, let me know what you think!

Click here to read more posts from my series on Peru…