Eating Our Way Through New Orleans! 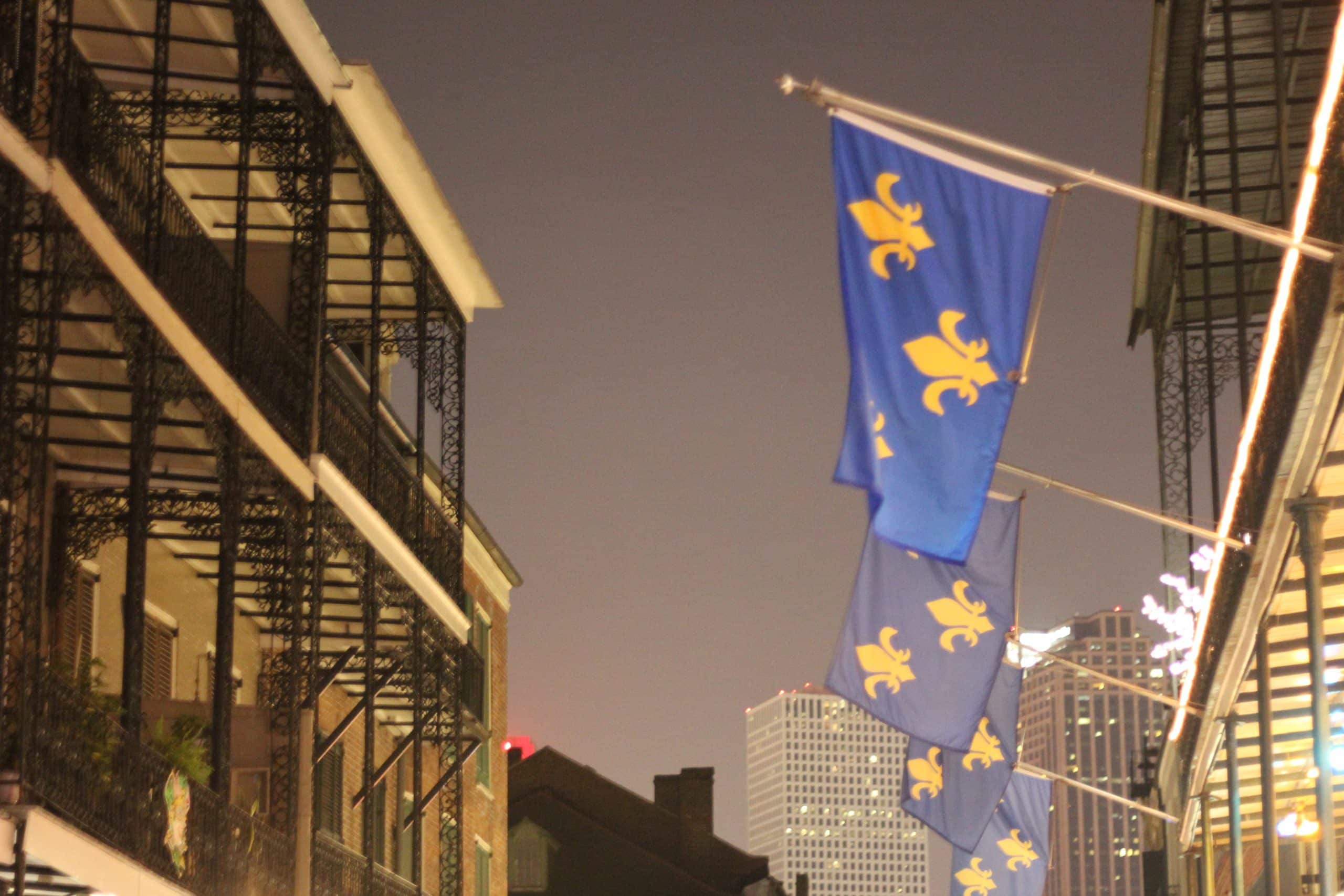 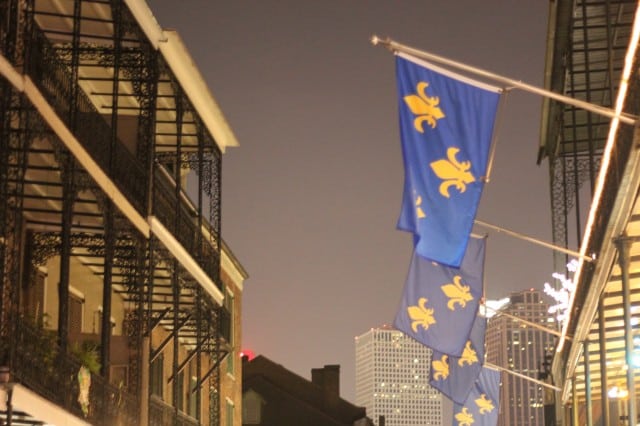 The Big Easy, NOLA, The Crescent City…whatever you call it there’s one thing that isn’t up for debate.  New Orleans is one of the greatest food cities around!  Rather than try to put it into words, I thought a photo journey through our recent trip would be more appropriate.  If you missed them, check out my New Orleans Foodie Itinerary and New Orleans Nightlife Guide.

Go ahead and take a spin through our foodie photo tour below…you’ll be planning your own foodie visit to New Orleans in no time! 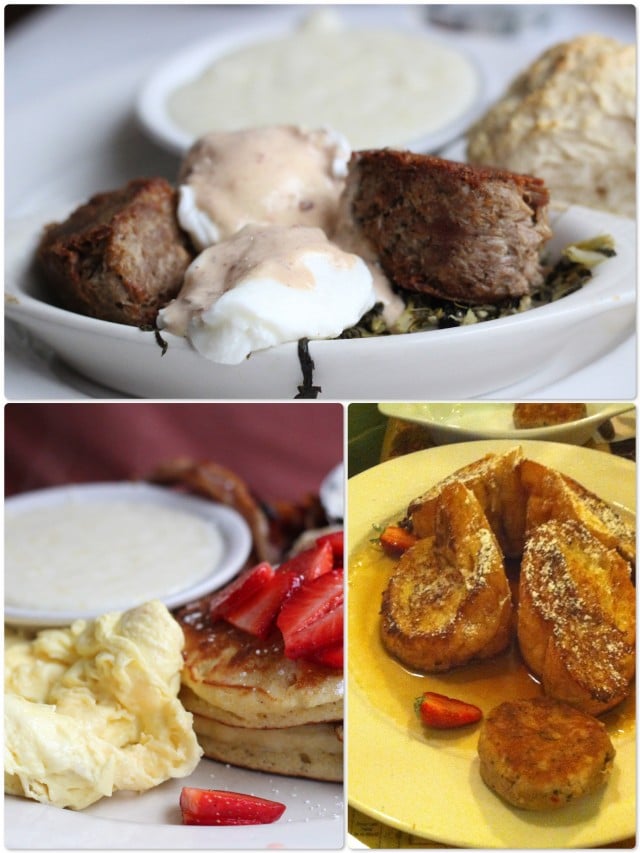 First things first…breakfast.  SavoryGirl’s favorite meal of the day. I have to say that any city that serves grits alongside most breakfasts is an immediate win…but beyond the creamy, buttery grits we had some amazing breakfast.  Pulled Pork Cakes over Mustard Greens with Poached Eggs Creole Hollandaise, Grits and a Biscuit (EAT). Strawberry Shortcake Cornmeal Pancakes (EAT). Banana Fosters French Toast with Boudin Sausage (Surrey’s)  Yup, this is a fantastic breakfast town! 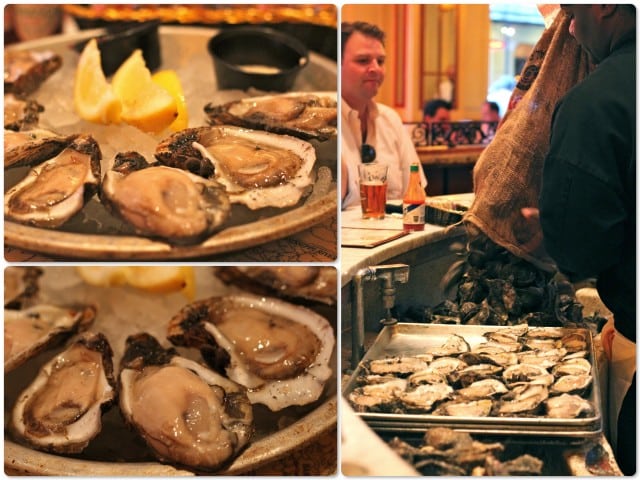 I love me some oysters and I have to say New Orleans had some of the biggest, plumpest oysters I’ve had in a long time.  So salty-sweet perfect and plentiful…which means cheap! If I had more time I would have had oysters every day I was there…those you see above are from Dickie Brennan’s Bourbon House…sit at the bar, order a drink and enjoy the atmosphere of local oysters being shucked and served right before you.  I really loved this place and highly recommend it. 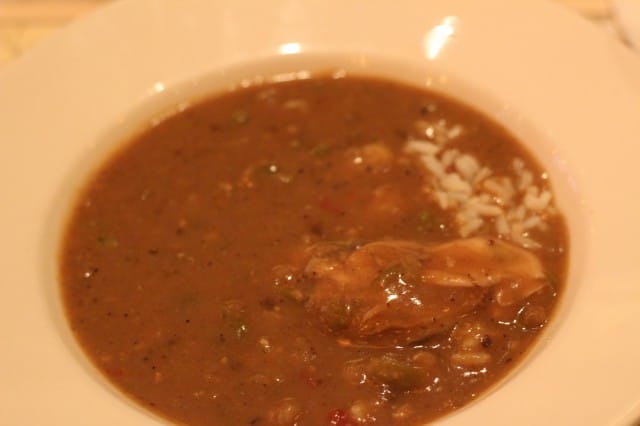 The gumbo above was also from Dickie Brennan’s Bourbon House and while I certainly wouldn’t consider myself a gumbo connoisseur I thought it was delicious.  Perfectly spiced, a little smoky, not too much rice and a nice big oyster right in it. As my local friend Dave recommended a beer, dozen oysters and a bowl of gumbo here really does make for the perfect meal.  It was my first meal when I arrived in New Orleans and I think it might have to become a tradition for future visits…it’s that good. 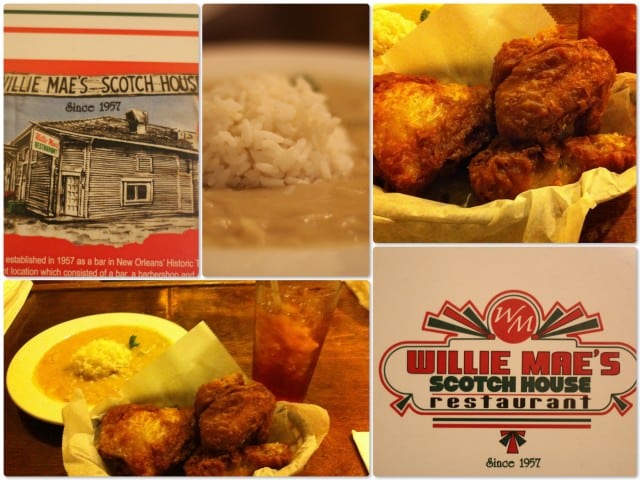 Oh, Willie Mae…you complete me.  If you’ve never heard of Willie Mae’s Scotch House make sure to read up on it here…it is so steeped in history and New Orleans tradition that honestly even if the food wasn’t good I’d want to go check it out.  And you know what, the food isn’t good…the food is great!  Well, at least what I had…the fried chicken which Willie Mae has become famous for over the years.

This is by far the crispiest, juiciest, most perfect fried chicken I have ever eaten.  A little bit of spiciness to it as well which I love.  I think it may have ruined all other fried chicken for me forever (and yes, that includes Jazz Fest fried chicken, which is very good but pales in comparison). The butter beans served alongside were quite delicious as well…and of course, don’t forget your sweet tea.  Seriously, get to Willie Mae’s for fried chicken whenever you are in New Orelans and treat yourself to a little foodgasm! 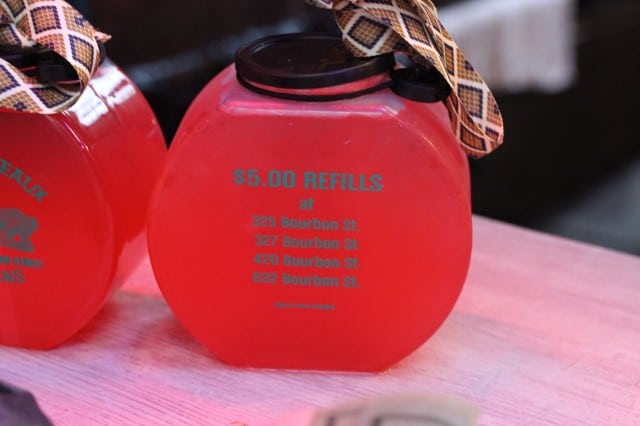 Ok, I have to admit…I did not have a Hurricane while in New Orleans.  I’ve certainly had them before, but I’ve learned my lesson.  All of that sugar means a nasty hangover and I’m just too old for that.  But go for it…especially if it’s your first time, you have to have at least one! 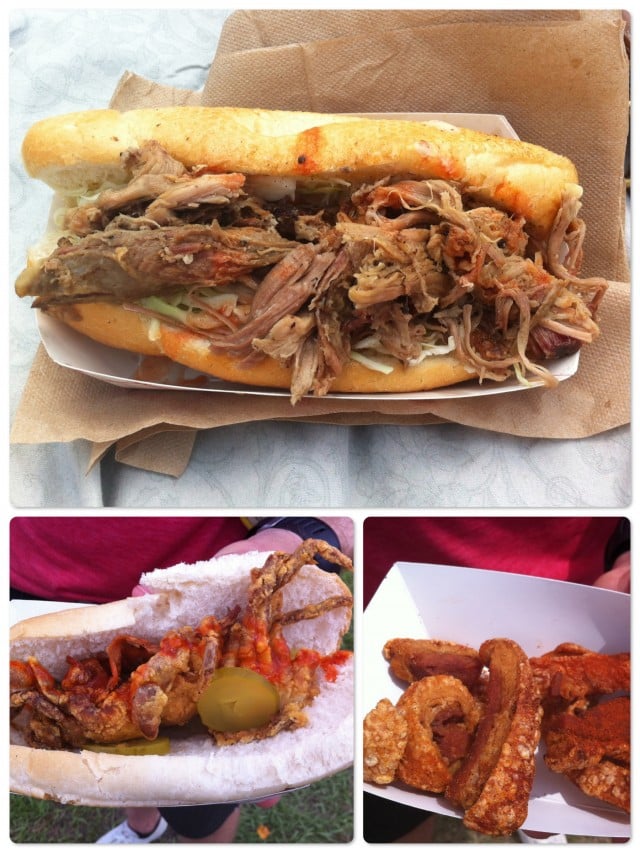 Jazz Fest food! So clearly you won’t always be able to get this but if you go during Jazz Fest, trust me…it’s as much about the food as it is about the music. Such good food for a festival, it’s pretty incredible.  So first up is the Cochon de Lait po’boy…basically suckling pig with a tangy slaw and some hot sauce.  So freaking moist and good. Next (counterclockwise) is a soft shell crab po’boy…Christian loved this and I agree it was quite yummy considering how straightforward it is.  Last, but certainly not least are the best cracklin’s that I’ve ever had.  Like so good that I think I would eat cracklin’s regularly if I could get them like this.  Super meaty, crunchy and spicy.  Man I would gain some weight if I lived in New Orleans! 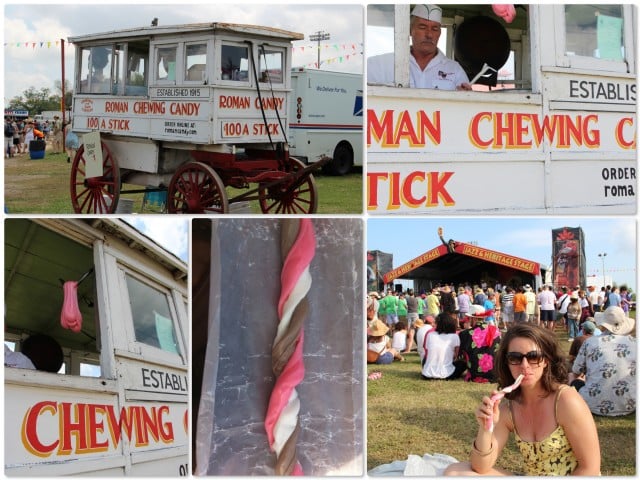 Also at Jazz Fest was the famous Roman Candy Cart.  Hand pulled Roman candy (kind of similar to taffy but in long thin ropes) that has been getting hand made in this cart since 1915.  1915 people!  So it’s a bit of nostalgia that you just have to indulge in.  It only comes in three flavors – Chocolate, Vanilla and Strawberry, so of course you have to get one of each and twirl them together for a Neapolitan snack!

So that just about wraps up our foodie tour through New Orleans.  Well…not exactly, but those where I had good pictures at least.  What’s missing?  A delicious dinner at Dante’s Kitchen (such good Shrimp & Grits and adorable atmosphere), our Beignets from Cafe Beignet and our meal at Commander’s Palace.

I know…how could I not share pictures of those last two…classic New Orleans!  Trust me, I’m as crushed as you are, but I forgot to take a picture of the beignet (sometimes my hunger and excitement overtakes me!) and I only brought my iPhone to Commander’s Palace (I hate being that girl with the camera at nice spots) and the lighting just wasn’t good enough to get any good shots without flash (I also hate flash in restaurants).  So, no photos…but I can tell you that everything was delicious and totally worth it, so go check them out yourself! The bread pudding souffle at Commander’s Palace is to die for…to. die. for.