Eating Our Way Through Chicago 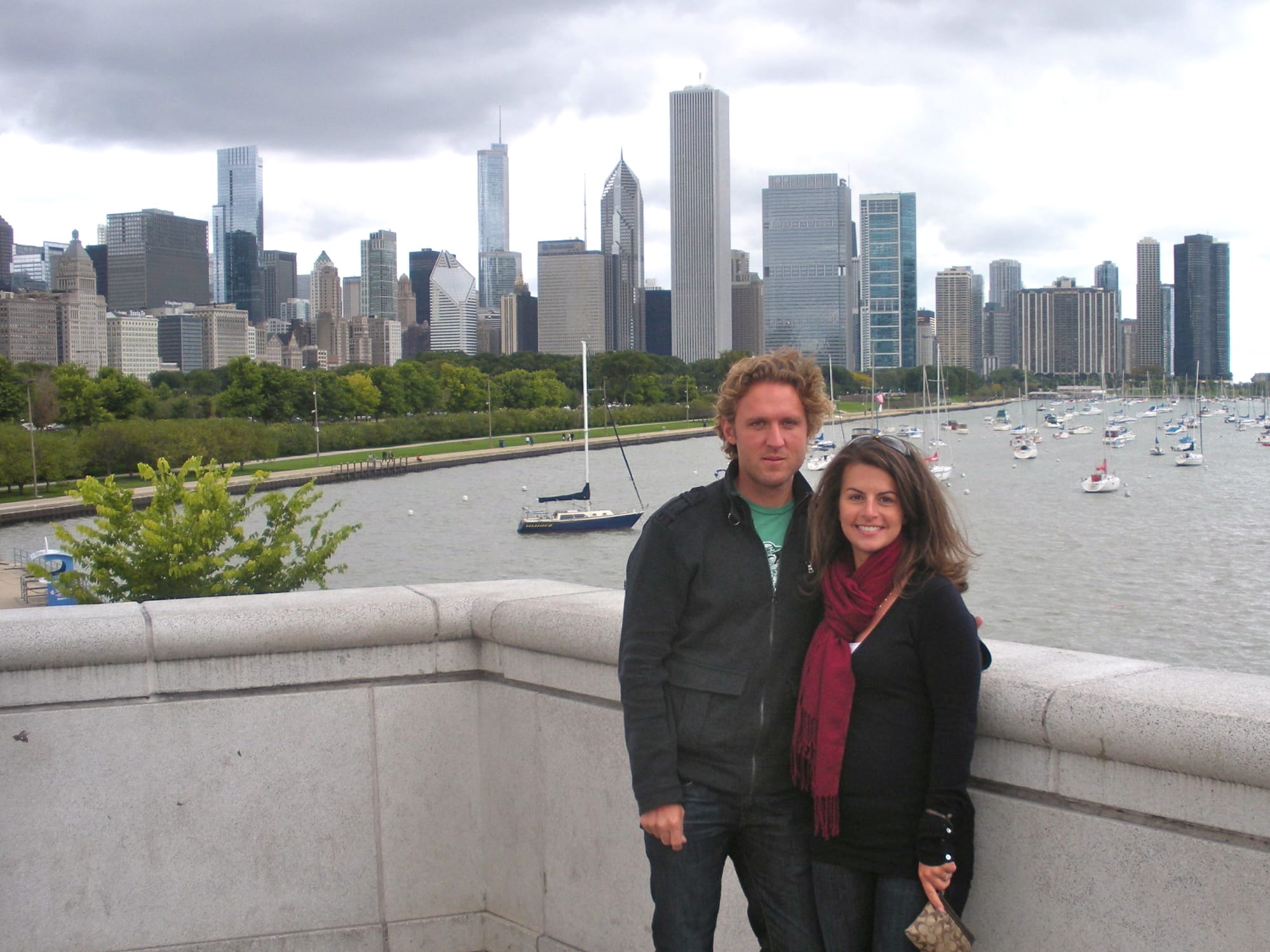 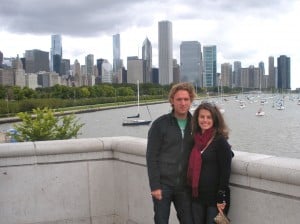 While I know I already shared my foodie itinerary for Chicago, I thought now that we are back from our trip I’d let you know what we thought and if everything on our original itinerary lived up to the hype.  So first things first….WE LOVED CHICAGO!  As a reminder, I hadn’t been there since I was a child and Christian had never been.  So it was pretty new for both of us…and to be honest we were expecting to like it, but not much more.  But after a day in Chicago I was talking about wanting to move there, and I love living in San Francisco and left Massachusetts because I hated the winters…but Chicago is that cool.  I honestly felt like the greatness of the city would outweigh any awfulness of the winters that I had heard about…but Christian disputed and insisted he wouldn’t move to Chicago with me so I had to let it go.  But really, such a clean and vibrant city with amazing architecture and waterways.  If you haven’t been, go.  Preferably in the late spring or early fall from what I hear.

So, our foodie itinerary.  How did we fare?  Very well if you ask me.  While we may not have made every destination on our itinerary, we made it to the important ones and let me just say, we ate extremely well while in Chicago!

Lou Malnati’s…pretty freaking good.  Not too heavy or greasy as deep dish can sometimes be and definitely something uniquely Chicago about it.  Not your chain deep dish here.  Super fresh tomatoes, slices of perfectly spiced sausage and oh so melty cheese.  And of course, that butter crust.  Yum.  To be fair, this is the only pizza we had while in Chicago, so no comparison.  But very good. 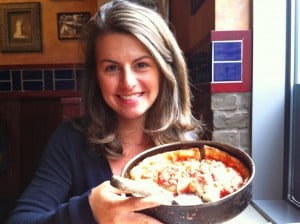 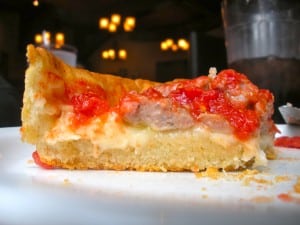 Girl & the Goat – so we weren’t sure we were going to make it here, but I’m pretty glad we did.  The atmosphere of this place is really great (although a bit loud).  Kind of funky and eclectic, but classy all at the same time.  Really popular and crowded though, so without a reservation we waited for about 40 minutes….for a bar seat.  There wasn’t a miss among all of the dishes that we had, but the two standouts are below.  My one complaint is that I thought it was too expensive for what it is…I think your paying a “celebrity” chef tax here.

Pan fried duck tongues with pickled watermelon rind, chili oil & coriander – super unique flavor combination, although the duck tongues could have been substituted with pretty much any other crispy meat and worked just as well. 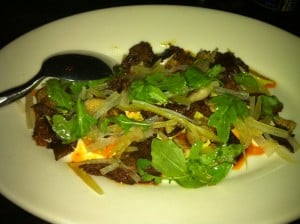 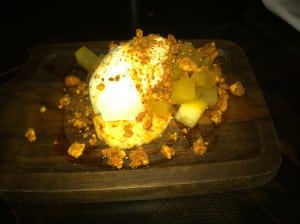 Rick Bayless’ Frontera Grill – Holy lord.  I would seriously eat breakfast here every day if I could and I kind of wish that we skipped the fancy dinner and just came back here instead.  Rick Bayless did not disappoint.  I could die and go to brunch heaven.

Christian’s Iroquois White Corn Pancakes with Whipped Goat Cheese were RIDICULOUS!  And that’s coming from SavoryGirl…but I guess cheese on pancakes does kind of make them savory. So freaking good. 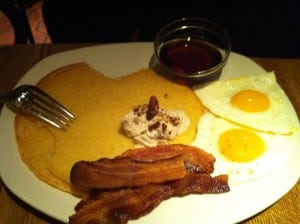 And my Huevos Estilo El Bajio were out of this world….and that’s coming from someone who thought Huevos Rancheros was the end all-be all to Mexican eggs.  Two poached eggs in crispy masa boats, black beans, creamy chile poblano sauce, Mexican greens & homemade chorizo. 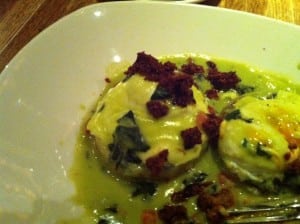 Oh, and did I mention we got “appetizers” of Platanos and Posole as well?  I mean, it is supposed to serve as two meals after all. 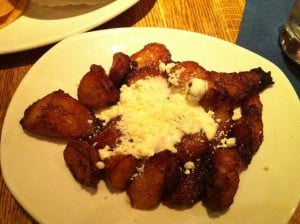 Graham Elliot – so this was our fancy night out…and while the food was really good, I kind of wish we either just pulled out all the stops and went to Alinea or Moto or skipped the expensive meal all together.  Graham Elliot just wasn’t all that different from the high-end prix fixe restaurants in San Francisco, so it didn’t feel like a necessary experience or expense to get the true taste of Chicago.  I think I’m biased because there were some snafus with our service as well…like ridiculously long waits in between courses and our meal lasting over 3 hours (and not because it needed to or we wanted it to).  So if you’re heading to Chicago, I would honestly skip this one.  That being said, a few of the more unique dishes below if you’re interested in doing one of the smaller tasting menus.  Like I said, really good food, just not uniquely Chicago in my opinion: 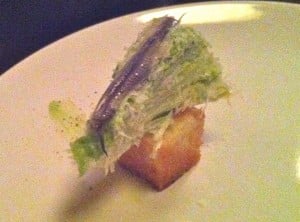 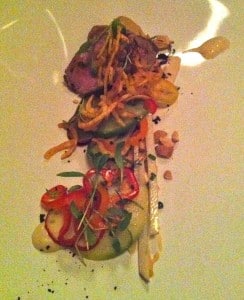 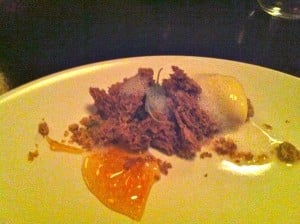 Al’s Beef – we managed to have 2 of these while in Chicago.  Mind you, we were only in town for 3 days.  That’s how good they are.  They sound so simple and unassuming, but they are so sloppy and spicy and good!  These are reason enough not to move here, I would have a serious problem staying away from them.  You have to go classic Chicago style though.  Just plain Italian Beef with homemade hot giardiniera peppers, dipped, no cheese.  Save the cheese for your fries (I would suggest getting the cheese on the side so it’s a bit more controllable, but that’s just me).  Do not miss getting an Italian Beef while in town….seriously. Unfortunately Mr. Beef was closed when we tried to go, so we have no comparison, but I can’t imagine anything much better than Al’s! 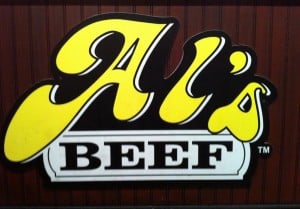 Not a cute picture, but you needed to see the pure enjoyment of an Al’s Italian Beef…so good! 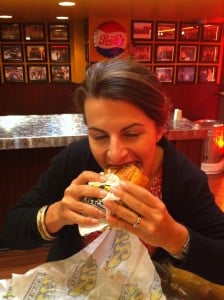 Oh, and we discovered some great bars as well.  Vertigo Sky Lounge is super fun  – it’s a roof-top bar and they hand out warm snuggly robes to wear.  I also really loved the Red Headed Piano Bar…definitely a bit of an older crowd, but feels like a throw-back and it is such a fun vibe…I definitely recommend stopping in for a Martini.

So, my final words on Chicago?  Plan a visit ASAP!  It is such a great city and there is amazing food there…we didn’t even dent the food scene on this one trip, so we’ll be back again for sure!