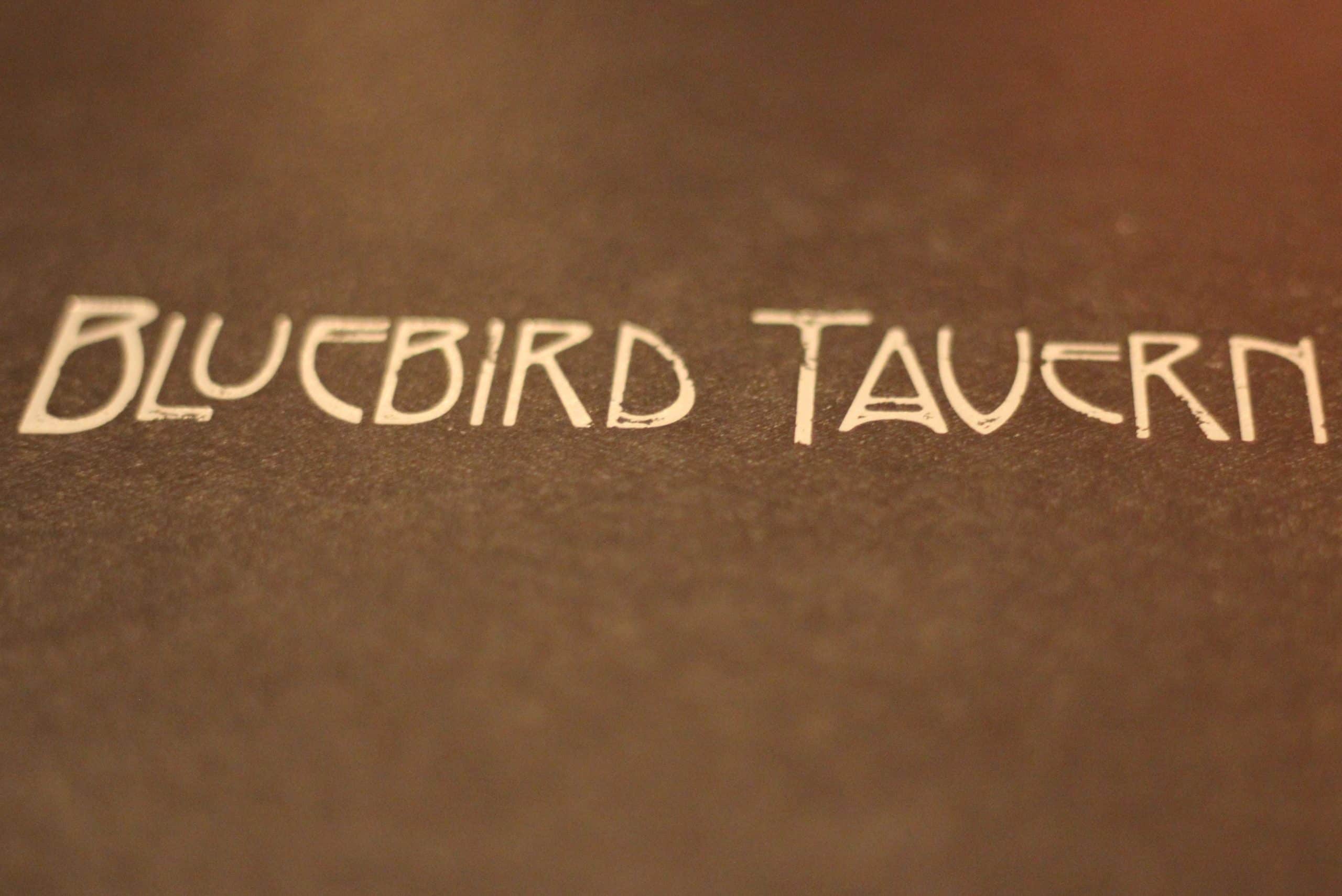 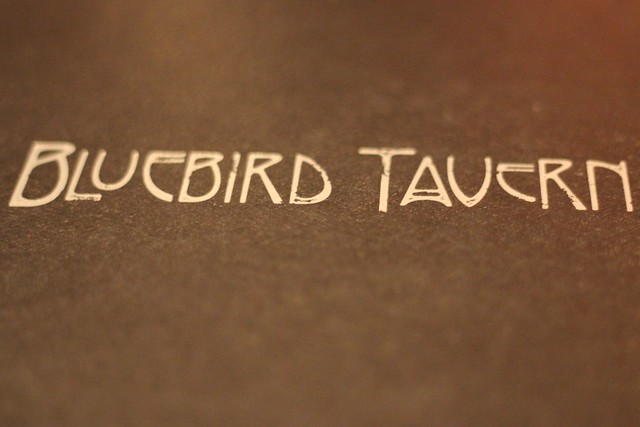 Flipping through Bon Appétit a few months ago, I stumbled across an article all about Burlington, Vermont which was convenient since I was heading there for a wedding in September.  So I read up and promptly made a reservation at Bluebird Tavern. Why? Well, first because it’s my kind of restaurant…one with intense ties to the local food community sourcing seasonally, locally, organically and proudly listing all of their farm partners right on their menu. Of course, it didn’t hurt that their menu sounded absolutely delicious and that the article made it sound like it was almost unfair for a small state like Vermont to have a restaurant this good!

I have to say I agree…this is a fantastic restaurant and I would strongly encourage you to check it out next time you’re in Burlington, with my only criticism being that I found it to be overpriced, but read on to find out all about the food… 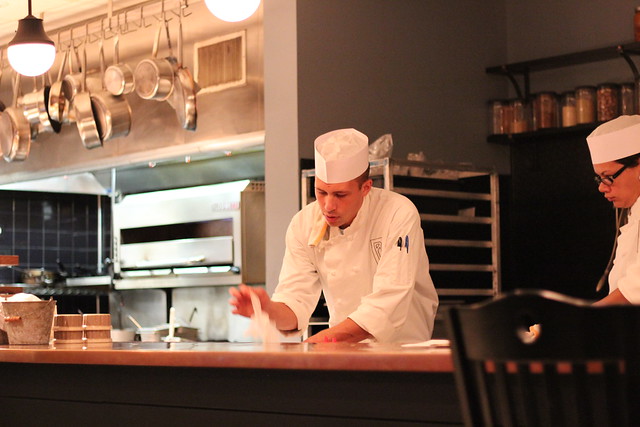 When our party of 5 first arrived at Bluebird Tavern the few outdoor tables were full but the inside was almost completely empty. It was 6:30 on a Friday night. A bit early, yes…but the lack of customers compared to the bustling vibe of other restaurants we had just walked by concerned us a bit. As you can see above, there is a lovely open kitchen which we were happily seated right near which at least temporarily distracted us from our concern over the lacking customers…and by the time we left it had picked up a bit more as well. 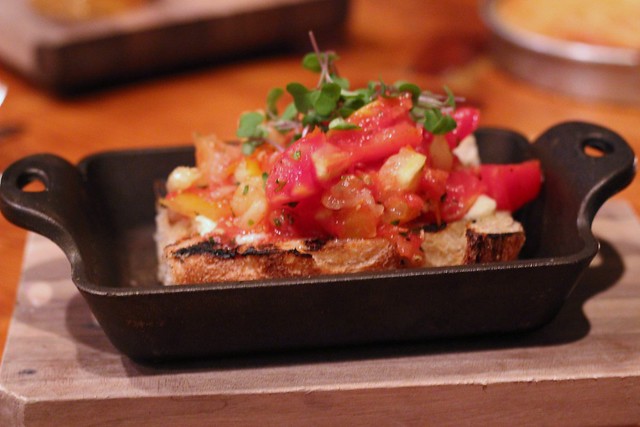 First up…a Vermont spin on bruschetta. Pickled tomatoes atop bacon butter and grilled bread. This was delicious, and we enjoyed the bread in this starter quite a bit more than the house-made focaccia that they brought over when we first sat down. Lovely, rustic serving style that you’ll see continued throughout the meal. 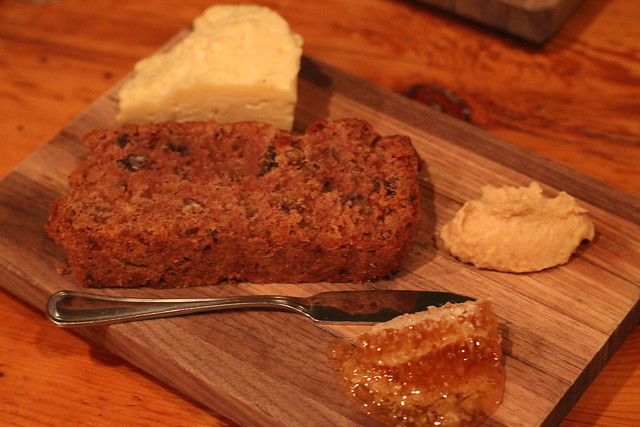 This next starter wasn’t even an option…as soon as I saw it on the menu I declared that we would be ordering it. Homemade cloth cheese served alongside local honeycomb, freshly made apple butter and spice bread. Each element of this tasting board was divine on it’s own but the cheese and honey together was like a Vermont welcoming party in your mouth.

The cheese was hard and a bit crumbly with almost an intense sharp cheddar flavor (but with a bit more complexity) and the honey had a hint of citrus and made you feel as though you were eating liquid gold. The apple butter was more like slightly sweetened pureed apples vs. the dark slightly gelatinous apple butter you see in stores. And the spice bread was so good you almost felt bad putting anything on it…would make a fabulous breakfast grilled with a bit of butter. 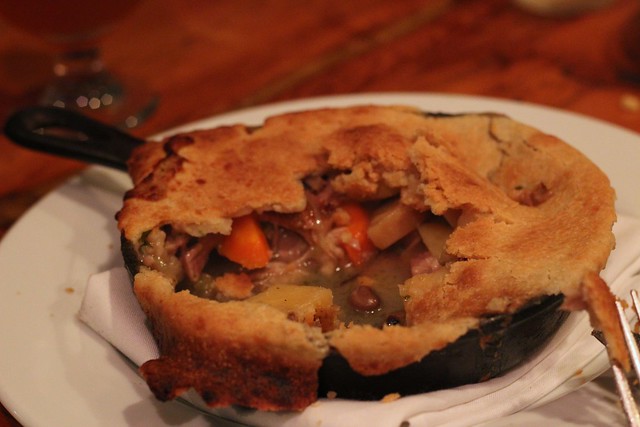 This was one of the big winners out of the entrees! A unique take on cassoulet  that was almost more of a cassoulet/pot pie hybrid. It did have some beans in it, but also had amazingly delicious potatoes (really, but potatoes in pies are usually so bland? Nope, not these potatoes!), carrots and succulent locally sourced pork. The crust was buttery, flaky and had a hint of sweetness that complemented the filling perfectly. Let me tell you, I was envious that I didn’t order this myself! 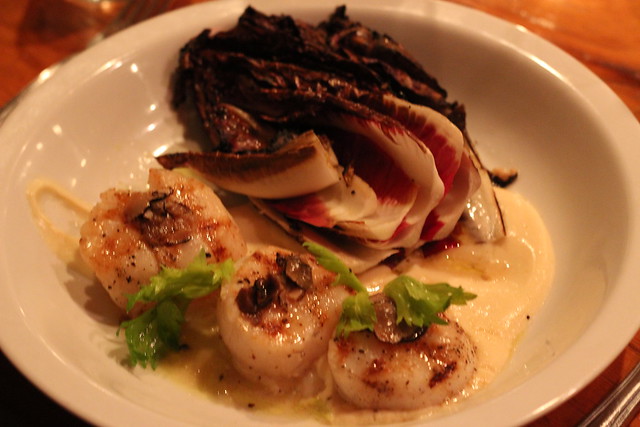 How can you go wrong with scallops and truffles?  You can’t…this was also delicious but in a much more straightforward manner.  Simple, fabulous ingredients skillfully cooked and paired. Period. The parsnip puree was a nice touch for someone like me who loves parsnips, but my friend felt that the grilled radicchio was kind of a throw-away and didn’t add much to the dish.  Overall, it was good…not transformational or something I would go back for time and time again like the cassoulet, but very good food. 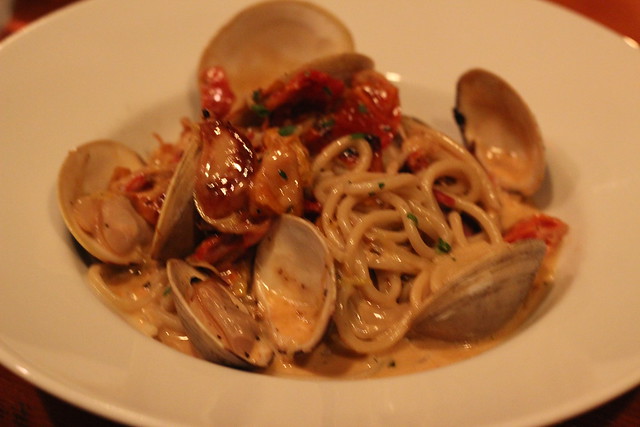 The spaghetti with clams was probably my least favorite out of all of the entrees. Don’t get me wrong, it was well-crafted and tasty but it just didn’t blow me away in terms of flavor or uniqueness. Christian really seemed to enjoy it though. 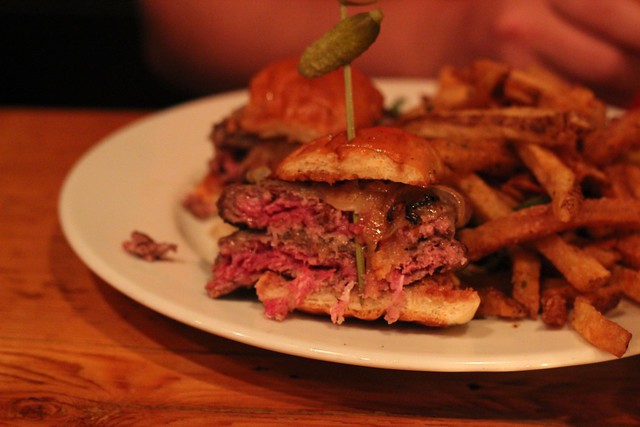 This was the second winner of the night, which surprised me a bit. But the bun was so light and moist, the burgers were cooked a perfect medium rare (although Jeff had asked for it to be cooked medium, so that was a miss) and extremely well seasoned and the grilled onions and Vermont cheese gave it just the right level of indulgence. The french fries were perfectly crisped and a great vehicle for their amazing homemade ketchup, which was almost a combination of ketchup, marinara sauce & bloody mary in flavor. I would buy this by the bottle if they sold it…and I’m not a big ketchup fan! 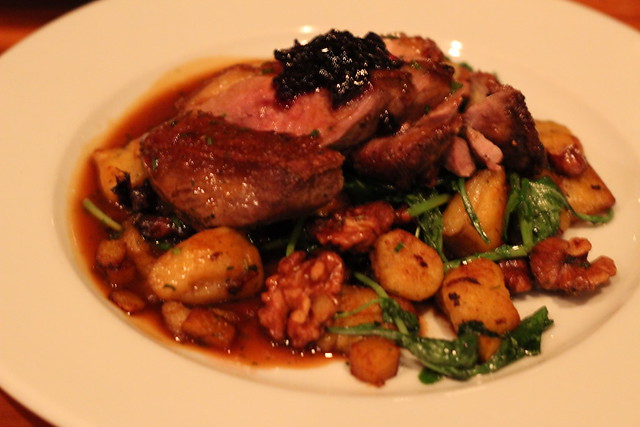 Last, but certainly not least, my dish. Seared local duck breast with pumpkin gnocchi in a sage brown butter with toasted walnuts. While it technically fell behind the cassoulet and burger this really was a phenomenal fall dish. The duck was cooked perfectly and the walnuts added a great textural difference alongside the fluffy pumpkin gnocchi (although the table ordered a side of these gnocchi as well and on their own they were a bit dry and uninspired). This is exactly the kind of dish you should be eating on a fall evening in Vermont! 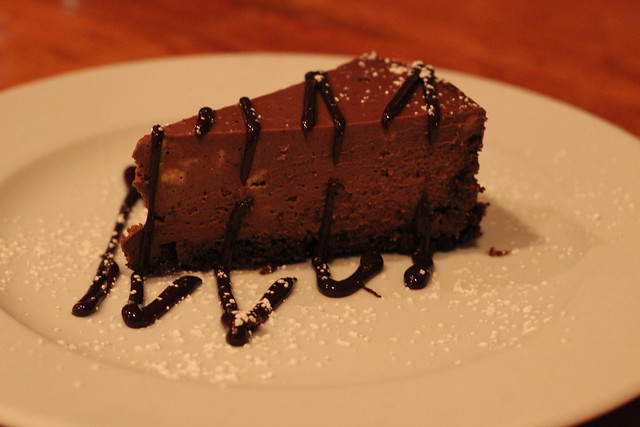 I’m not typically the “decadent chocolate dessert” kind of gal…but sometimes you get outvoted by the table and have to just go along but this time I was happy that I did! While a chocolate mousse cheesecake sounds and looks decadent, as you can see above, this was amazingly intense in flavor but somehow light in texture. My fork just kept going back in for more…I’m happy this isn’t on the menu at a restaurant in my neighborhood, I’d be in trouble!

Have you been to Bluebird Tavern? If so, what did you think? Did you enjoy it as much as we did? Share!