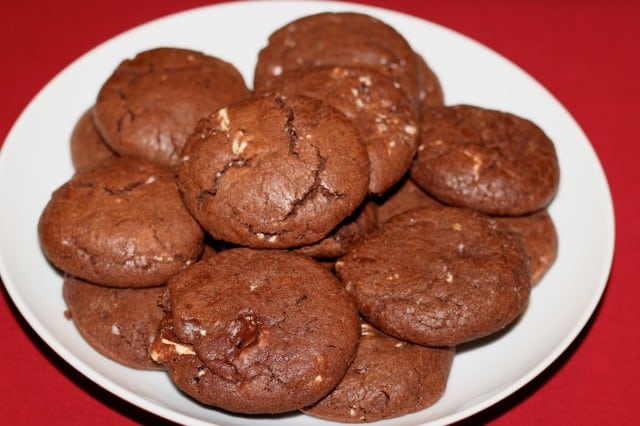 Over the past three years, these cookies have come to mean Christmas to me. Their soft, cake-like texture. Their not-to-sweet chocolate depth. Their perfectly peppermint-y bite. Tastes like Christmas…so much so that I’ve already made three batches this year!

I first discovered this recipe a few years ago when researching new cookie recipes for my annual cookie party. I’m not typically a big peppermint fan but come Christmas time I all of a sudden can’t get enough peppermint bark candy or peppermint stick ice cream. So I was looking for a way to incorporate this strange seasonal craving into my cookie party and stumbled upon this recipe on a blog called 101 Cookbooks.

Since this recipe makes quite a few cookies, feel free to also freeze half of the dough (or even double the recipe and freeze a full batch) so you have it on hand for when guests stop by unexpectedly during the holiday season. Once you have the dough all lined up on the cookie sheets ready to go in the oven, simply pop the cookie sheet in the freezer instead and once the cookie dough balls are fully frozen you can then put them all in a freezer storage bag. Pop right from the freezer to the oven when you’re ready to make them…they might need an extra 1-2 minutes in the oven, but no need to thaw first. Will make your house smell divine while they’re cooking, which is nice when guests are visiting as well!

The recipe below is almost identical to the 101 Cookbooks original that I first made years ago, but I’ve adapted it slightly over the years:

Preheat the oven to 375F degrees. Position the racks in the middle of the oven, and line baking sheets with parchment paper.

Mix together the flour, cocoa powder, baking soda, baking powder, and salt in a large bowl. Set aside.

In a large bowl or stand mixer, beat the butter until light and fluffy. Then beat in the sugar until it is the consistency of a thick frosting. Beat in the eggs one at a time, incorporating each fully before adding the next and scraping down the sides of the bowl a few times. Stir in the vanilla until evenly incorporated.

Add the previously mixed dry ingredients in 3 increments, stirring between each addition. You should now have a moist uniform dough. Stir in the peppermint bark and chocolate chips by hand, mixing only until evenly distributed. I pretty much only use Trader Joe’s Peppermint bark because I love it…but feel free to make your own or use a different brand as long as it’s nice thick peppermint bark (the thinner bark just doesn’t work as well).

Take a heaping tablespoon of dough at a time and roll it into a ball with your hands. Flatten the ball between your palms slightly and place discs of dough onto the cookie sheet lined with parchment paper, about 2″ apart. Bake for 10 – 14 minutes, until very fragrant. If cooking two sheets at once, switch the sheets between the top and bottom racks about half-way through the cooking time so both sheets cook evenly. You can also sprinkle any extra peppermint bark on top of the cookies at this time if enough isn’t already poking out naturally (I wouldn’t sprinkle at the beginning of the baking time…the peppermint bark gets a bit brown and toasted which isn’t quite as pretty).

Once cookies have finished cooking, slide parchment paper onto wire racks and cool for 20-30 minutes before storing in an airtight container.