As I was walking towards my neighborhood Fort Mason Farmer’s Market this weekend I felt a certain buzz in the air as I approached.  There were more people, more smiles, more laughter and a general uplifting feeling.  As I looked a bit more closely I quickly realized why…the start of the summer produce has arrived!

I grew up in Massachusetts, so to be clear eating only what produce is in season is not something that I was brought up doing but after 8 years on the West Coast this has become second nature to me (well except for my bananas and the occasional pineapple which are never in season here but I can’t seem to give up!).  In climates a bit less forgiving than CA, eating only what is in season is admittedly not quite as easy but I truly believe that it is still a worthwhile and rewarding effort…why?  Well, my reasons are… 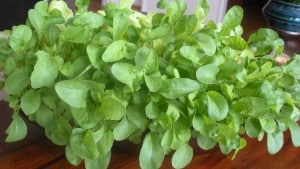 My homegrown arugula...grown in a wooden bowl in my little SF apartment!

So as you enter this most bountiful produce season why don’t you challenge yourself to try eating only what is truly in season for the Summer…it’s the easiest time of year to try it and who knows you may even be tempted to continue it on into the Fall, Winter and Spring and then be rewarded with that first peach of the season like you’ve never tasted before!

So how to go about doing this?  There are two easy ways to do it really.  The first is to simply find & sign up for a local CSA (community supported agriculture) where a box, usually in the size/price you want, of fresh, local, seasonal produce will be delivered right to your door…or at the very least a convenient location for you to pick it up.  The second is to simply consult a list for what is in season in your area each month and make sure your sticking to that list when you go shopping.

So what do I do when the seasonal bounty is, well, less than bountiful?  I simply use frozen fruits and veggies when I have a craving for something in particular or a recipe I’m making calls for something out of season.  I also often freeze my own produce when it’s in season…especially if it’s just about to go bad so I don’t waste it.  Some day I may even get ambitious and try my hand at canning, but that, my friends, is for another blog post.