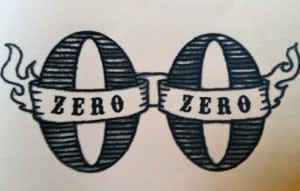 Continuing on my pizza theme this week, time to talk about Zero Zero!  Now I know Zero Zero has been open almost a year now, but somehow Christian and I just haven’t been able to get there until now. What was the occasion?  My best friend’s husband was in town for work and staying at the W so we wanted a good place nearby…enter Zero Zero, yippee!

The risk?  Our friend Jeff is a New Yorker, born and raised…so he knows his pizza.  Given all of the hype and positive reviews I was confident in our choice (although I did find myself wishing that we could take him to Una Pizza Napoletana where I 100% knew he would have been impressed! But we were just there and I have weird rules…I digress).

Walking into Zero Zero you’re immediately enveloped by a warm, upbeat and welcoming atmosphere.  Dark wood, warm lighting, two open stories with a grand staircase and happening bars on each level.  The waitstaff and bartenders are attentive and friendly…the kind of place where you actually don’t mind getting a drink and hanging around until your table is ready.  The downstairs bar is separated from the dining room by the staircase so it feels more like a cozy (yet relatively spacious) lounge than another unpleasant restaurant bar.  For that reason I actually preferred the downstairs bar to the upstairs one even though the one upstairs seemed to be more crowded and popular on this particular Wednesday night.  Great wine (on tap and in the bottle), beer and cocktail selection (punch bowls to share at a pizza place? neat!) as well.  Really nice bathrooms too…and those of you who have been reading SavoryGirl for a while know my philosophy about restaurant bathrooms…they’re a true indicator of the quality and cleanliness of the restaurant and food over all!  Really though, fantastic atmosphere at Zero Zero….almost like an upscale brewery vibe to it where it’s classy enough for business meetings and a night on the town but casual enough for the locals or a low-key comfortable night out.  Love it!

Upon being seated in a booth with a nice view of the pizza oven and kitchen our waiter was immediately upon us asking if we had ever been to Zero Zero before and when he learned that we hadn’t he gave us a helpful but brief overview, encouraging us to order family style and to be sure that we tried a pizza.  He also had a fun trick where he was able to immediately tell what beers Christian and Jeff had ordered at the bar just by looking at them…very friendly waiter indeed.  I have to say though, the pizza oven isn’t nearly as impressive as Una Pizza Napoletana’s centerpiece! 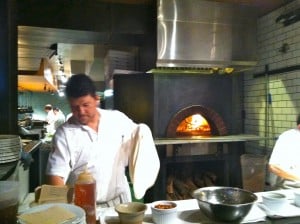 So we had a bit of a hard time deciding what to order because everything sounded so good!  But we finally landed on splitting the following:

Both antipasti dishes were delicious…

No photo (sorry!), but the Grilled Gulf Prawn Skewers with Eggplant & Burrata were cooked and seasoned so perfectly that if I closed my eyes I could have sworn the prawns were a decadent cut of red meat.  That may not sound like a good thing, but trust me, it was.  Really flavorful with a delicious, smoky eggplant sauce and that oh-so decadent Burrata cheese.

I had read a lot of fabulous reviews of the Pork Belly antipasti (pictured below), and it didn’t disappoint.  The “Roman Style Dumplings” were basically polenta cakes with crispy yet tender broccoli.  Both were complemented with a perfectly poached egg and tender delectable pork belly.  The harissa is a bit of an outlier and I’m not sure it is completely necessary, but it does add a nice layer of complexity and contrast to the dish.  Man, this was a yummy appetizer…I tend to be partial to anything with pork and a poached egg involved though! 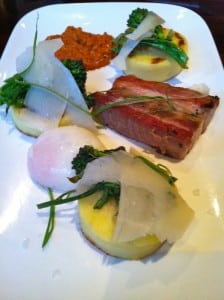 Moving onto the pizzas.  Oh, I hate to say it…but the Margherita was a disappointment in the context of all the fabulous things I have heard and the fact that I had just had Una Pizza Napoletana’s Margherita for the first time a few days before.  To be honest, it doesn’t even rank up there with A16 or Delfina for me….I’m not sure where people are coming from saying that this might be the best pizza in the city!  Especially since there’s so much focus on the crust and it just didn’t cut it for me.  It was chewy and slightly limp and really not all that crispy at all, especially given the beautiful black blisters.  Because this was such a disconnected experience from all of the rave reviews and because there was a pretty lengthy delay between our antipasti and our pizzas (especially given the fact that Neapolitan pizzas only cook for about 90 seconds traditionally!) and because our pizza arrived at our table pre-cut which is not the norm from what I understand…I wonder if we had an unfortunate bad experience.  I mean don’t get me wrong, it wasn’t bad pizza…just not great pizza like I’ve been hearing. 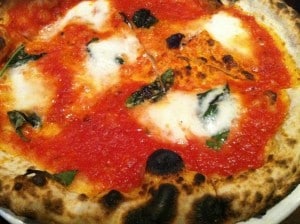 Margherita Extra Pizza: my favorite type of pizza and point of comparison when trying to judge a new pizza place

Now, everything I’ve said about the crust on the Margherita also holds for the Seasonal pizza’s crust.  However, I found this particular combination of pizza toppings to be fantastic!  The ricotta cream base and spicy and sweet toppings were just perfect…who knew I would love corn on pizza?!  So even though I will not say that this is the best pizza in the city I will try more of their unique pizzas in the future…just not the Margherita again, and you know if you can’t hit the Margherita out of the park you’re just not the real deal in my opinion.  Simple is often very hard. 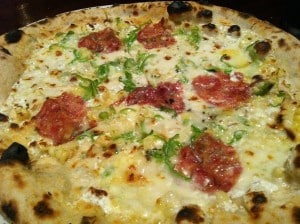 I was seriously almost as excited for dessert at Zero Zero as I was to try their pizza!  Zero Zero has top options for dessert…a hard root beer float (yes, hard as in spiked with alcohol) or a build your own sundae with Strauss Family Creamery Soft Serve and ridiculous base and toppings to choose from.  This brings you back to childhood but with a grown-up slant…but beware, you can build yourself an expensive sundae if you over do it!  They do offer half-size ones though (which are still plenty big) so you can try a few different combinations.  So we made two half-orders. 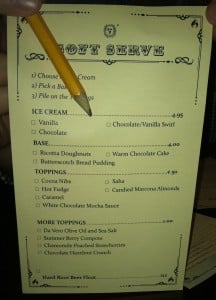 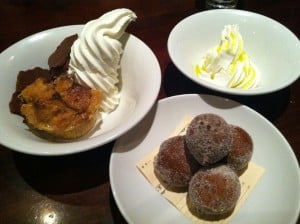 Of course, the soft serve was creamy, dense and amazing.  The doughnuts and the bread pudding were pretty good but not totally worth the cost or calories in my opinion, particularly the doughnuts which don’t necessarily benefit all that much from the ricotta they just taste like higher quality carnival doughnuts that you loved as a kid.  The knockouts, however, were the Chocolate Hazelnut Crunch (like a creamy crunchy Nutella bar!) and the DaVero Olive Oil & Sea Salt topping.  We all know that olive oil & sea salt on dessert is popular these days but this was by far the best I’ve had so far.  I’m always left craving more pronounced salt…if you’re going to salt your dessert, have some guts I say!  And Zero Zero does…I would eat that vanilla ice cream with the thick bright olive oil and heavy dosing of sea salt every night.  Yum-mee!