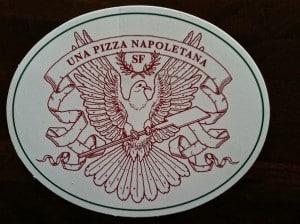 Pizza is a hot topic in this city…we’re always disparaging ourselves against the East Coast, but to be honest I’m racking up so many amazing pizza places these days that I’m considering hosting a “Margherita-Off” sometime soon to truly determine who my favorite is!  Una Pizza Napoletana has without a doubt joined my growing list of faves…

If you haven’t heard of this place give it a quick Google and you’ll quickly see that there is a lot of hype and back story…but the one key piece of information is that Anthony Mangieri, the owner and pizza maker, developed a cult-like following when he had his original pizza shop in NYC.  That’s right, folks, the New York pizza crowd loved his pizza…intriguing to say the least!    So Christian and I went and tried it out this past Friday and while we’ve only been once, here is what we found:

Mangieri makes freakin’ good pizza!  I mean the kind of pizza that reverts you to childhood when you loved pizza so much that you would throw a tantrum trying to get some (was that just me?).  Memories of scraping the toppings off of my slice with my top teeth to uncover the slightly doughy undercooked layer of crust just below the sauce contrasted with the perfectly crisp bottom….man, that’s one of my earliest fond food memories.  These are the types of things that Mangieri’s pizza makes you think about as you take that second bite (I’m just being honest here…the first bite was clouded by skepticism, my guard was up). 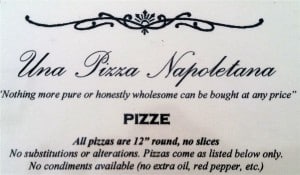 Now to be fair, a lot of people won’t like this place.  For the same reason that a lot of people don’t like Omakase or Chef’s Choice menus.  I personally love putting myself in a Chef’s hands…particularly when they are as focused hands as Mangieri’s with a perfected craft.  When I say you are putting yourself in the Chef’s hands, I mean it.  There are 5 pizzas on the menu…no meat on any of them, no changes or substitutions and don’t even think about asking for parmesan, red pepper flakes or even pepper for that matter.  You get a little salt shaker on your table and that is about all of the customization you’re allowed.  There are no salads, no pastas, no appetizers and no dessert.  They do hydrate you though….a small, but good mix of beer, wine and non-alcoholic beverages.  I was particularly pleased to find Moretti La Rossa on their beer list.  Oh, right…and when he runs out of pizza dough the restaurant closes.  So get there early, especially on the weekends. 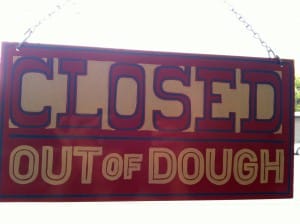 The atmosphere was fantastic…a bit fancier than I expected (to be honest I was expecting a super casual pizza joint) but still very comfortable.  Lots of light and with Mangieri and his beautiful blue pizza oven on center stage with nothing but a low railing around his work station you can almost consider this dinner and a show.  The mostly Italian waitstaff are attentive, knowledgable and clearly smitten with the pizza and the idea of their place in general…you get a real sense of pride in their pizzaiolo. 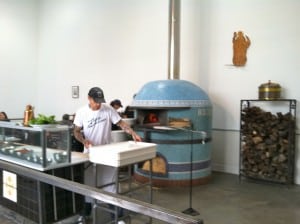 Okay, okay SavoryGirl!  Enough with the lead up, HOW WAS THE PIZZA?!  Well besides bringing back the childhood reverie that I already told you about these really were amazing pizzas (yes, we ate two.  Don’t judge.)  According to their menu, they are 100% handmade Neapolitan pizza, wood-fired brick oven baked & naturally leavened.  All are 12” round and brought to your table unsliced so you can slice it up into whatever sizes you want (or just split it in half like we did!). 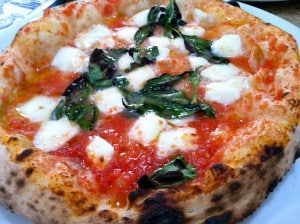 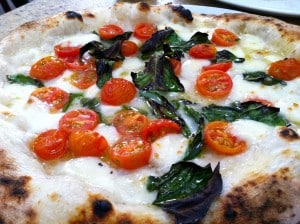 Both were so simple and fresh but what really made them stand out was the crust and the savvy use of salt.  The crust is almost more like a pastry than a pizza crust…or like a super fluffy naan.  So incredibly light and chewy inside but crispy and perfectly blistered on the outside.  Just writing about it is making me crave it.  I’ve read a lot of criticism of their use of salt on pizza, but Christian and I loved it…so smart, I wonder why others don’t do it to bring all of the flavors together, genius!

So if I had to be critical, what would my criticisms be?

I hate to end on a critical note though (even if they are light criticisms), because truly this is some of the best pizza I’ve had in the city, and for that fact on the West Coast, and I absolutely love the whole idea of this place.  It does feel incredibly authentic and reminds me of both my time as a child eating pizza and of my time as in Italy.  If you haven’t been to Una Pizza Napoletana go check it out, I promise you won’t be disappointed!  If you have been, let me know what you thought…

Next up in the SavoryGirl pizza chronicles, Zero Zero.  Stay tuned…and if you have a favorite SF pizza place of your own that you’d like me to check out and compare to Una Pizza Napoletana let me know!