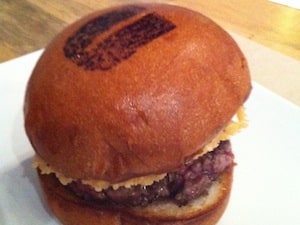 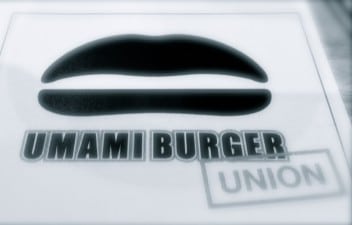 Most of us living in the Bay Area know that there is a, shall we say, friendly little competition between those of us living in San Francisco and those living in L.A. Why? I’m not really sure. They’re such different cities they’re honestly hard to even compare but the back and forth continues. Which city is better? Nor Cal vs. So Cal? The prettier people? The smarter people? Which is better…having prettier people or smarter people? The best restaurants? It goes on and on. Silly really, but it’s here to stay.

So when I heard that L.A. import, Umami Burger was opening it’s first northern CA location in my neighborhood I was intrigued to say the least. So intrigued that Christian and I popped in for lunch on day 2, right in the middle of their soft launch. So not really fair to assess the restaurant in it’s entirety so early but since we did check it out I thought I’d share:

Ambiance is nice…urban simplicity with Asian accents.  Honestly not all that different in ambiance than JoVino which used to be in that space.  Nice light and a bit of outdoor seating if you’re lucky.  Since it’s their soft opening I won’t comment on the service…they were clearly still getting their act together which was to be expected this early on.  So on to the food….

One of the big differentiators for Umami burger is the care that they put into their ingredients.  I know, I know…that’s pretty common in the Bay Area, but I’d argue not as much for a burger place.  Umami grinds all of their own meat, processes their own cheeses, pickles their own veggies and makes all of their sauces in house.  Their buns are high quality brioche branded with their logo of course (they are from L.A. after all!)   They cook all of their burgers medium rare unless you specify otherwise which was immediately a good sign to me…I don’t understand the point of ordering a burger if you’re going to cook it anymore than that.  Their house-made ketchup is delicious, and usually Christian is the ketchup fiend in our family but this was deep in flavor, not too sweet and maybe even a bit smoky.  Yum.

Christian got the namesake Umami Burger…their house ground beef burger topped with shiitake mushrooms, caramelized onions, roasted tomato, parmesan crisp & house-made ketchup.  Burger was really juicy and the combination of toppings was quite good. Not really my kind of burger, but definitely tasty: 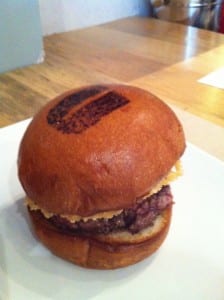 We shared an order of their smushed potatoes which were perfectly crispy on the outside but tender and creamy on the inside.  Their house-made aioli had a nice hint of lemon to it for dipping, but I honestly couldn’t resist their homemade ketchup.    I know these are good because Christian hates potatoes and pretty much all french fries but he ate a lot of these :) 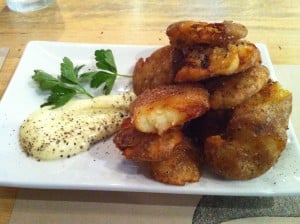 For my burger, I went with an old stand-by so I could compare to others that I’ve had.  They called it the Port & Stilton burger…their house ground beef burger topped with blue cheese & port-caramelized onions.  Now this, was my kind of burger.  They didn’t skimp on the stilton which was nice and intense, just how I like it.  The onions were deeply caramelized with additional depth and sweetness from the port.  Add all of that on top of  a juicy burger and you have a delicious mess dripping down your fingers! 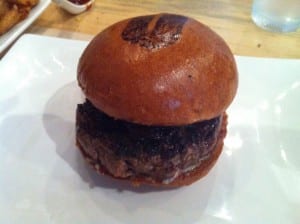 So delicious, yes.  Best burgers I’ve ever had?  Probably not.  I think they grind their meat a bit coarsely for my liking to be honest…there was something about the texture that wasn’t quite perfect for me.  Very good overall though…you can definitely taste the quality of the ingredients.  When I’m craving a burger again I’d certainly go try another off their menu, but there are a lot of great burger places in town, so not sure this would necessarily be my first pick.

If you’re curious what usually is at the top of my burger list…it’s good ‘ole Pearl’s Deluxe Burgers on Post.