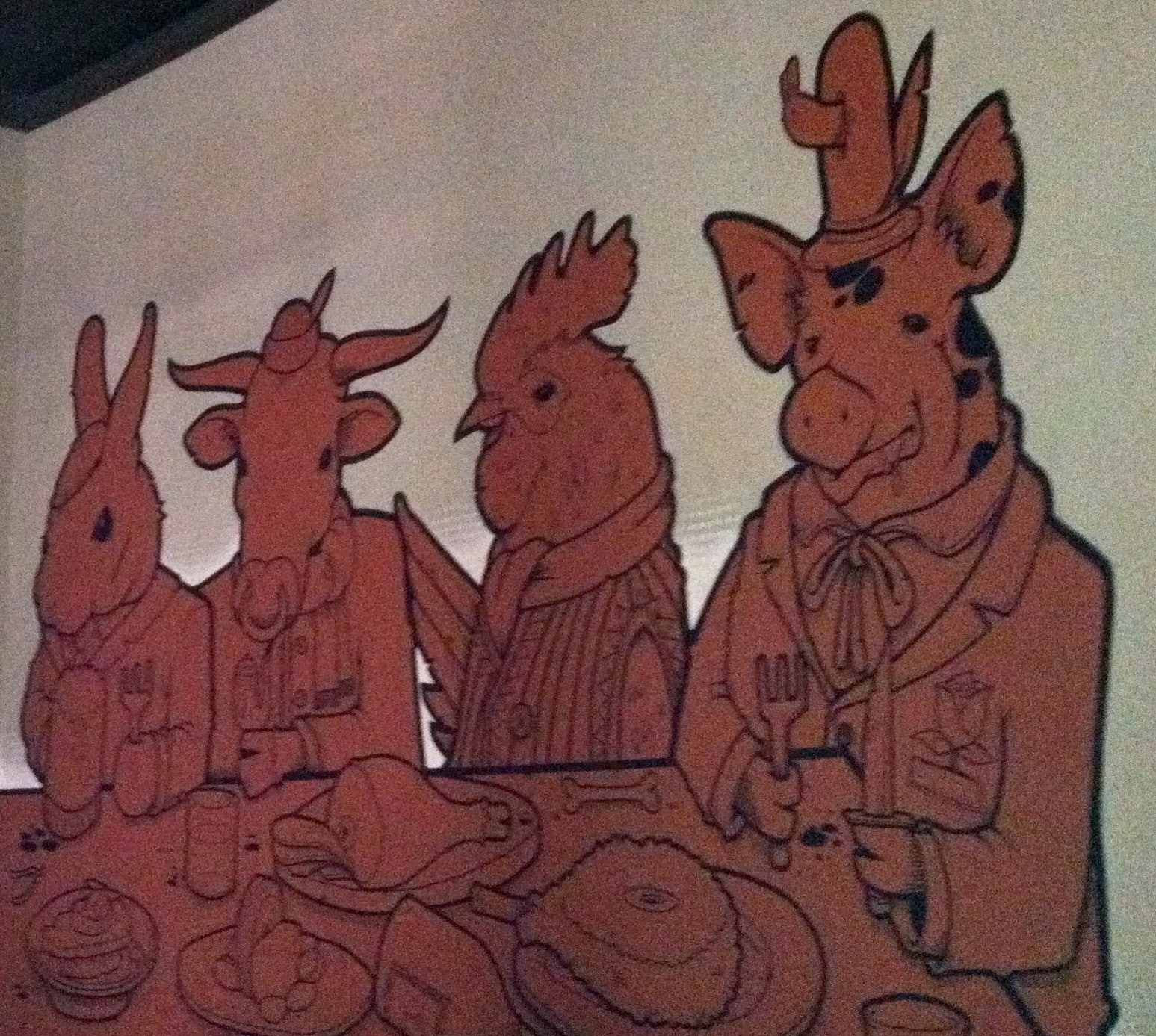 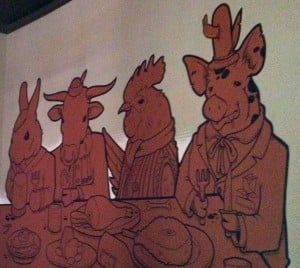 I lived in San Sebastián, Spain in the Basque Country for almost 6 months back in 2001 and while I was there I actually had the rare (as a woman) and amazing experience of being invited to take a 6-week cooking class at a traditional Txoko…or a sociedad gastronómica that is traditionally only open to male members.  I LOVED my time there.  A rare sneak peak into Basque history…eating an eel that we just saw killed in the kitchen, seeing a whole duck respectfully transformed from a feathery whole animal into an amazing feast, actually enjoying eggs scrambled with sheep’s blood and intestines, learning the simple beauty of Piperade, the gastronomical list goes on!

It really opened my eyes to having a true connection with your food and between that experience and the many hours I spent in Pintxos (Basque version of tapas) bars I quickly learned to love Basque food.   So needless to say, I was excited to try out Txoko, especially since my beloved Iluna Basque closed back in December.

Before I get started, to be fair, Txoko has only been open for 10 days and we all know those early days aren’t easy.  So these are only first impressions, but I’ll want to go back in a few months to compare/contrast once they’ve settled into a groove.

Upon entering Txoko my first impression was that I liked the rustic, dark wood  with metallic accent decor but that the dining room and patio area felt pretty huge for a SF restaurant.  For a new restaurant I imagine the pressure will be high to fill this place to make the financials work…but it is awfully nice to have space between the tables and a little bit of breathing room!  The Jeremy Fish mural on the wall is also quite fun and I love the communal table and bar area.  However the dispenser of paper napkins on every table and mason jar full of silverware for you to grab seemed a bit casual and out of place for the rest of the atmosphere and way that the food was plated.  Service left a bit to be desired…pretty slow considering it wasn’t super busy and the staff didn’t seem well versed in Basque culture (confusion arose when I pronounced the Basque Cidra as Cidra and not Cider and I was thanked with a Grazie instead of Eskerrik asko or even Gracias) that is supposed to be the inspiration for this restaurant.  Kinks that I’m sure will be worked out though.

You can see what we ordered visually below, but in general after eating the entire meal I have a hard time believing that the food is Basque inspired.  There really wasn’t anything on the menu that immediately caught my eye as something you would commonly find in the Basque country or even very Spanish for that matter.  Yes there was Manchego worked into things and a bit of chorizo and piquillo pepper here and there but minimally so.  Also, while the prices are pretty reasonable, be forewarned that the small bites & pintxtos are truly a per-serving price…not really big enough to share which is fine as long as the waitstaff explains them that way.  Since most come out on crispy toasts they’re a bit difficult to split…and really, can we accompany them with something other than toast?  A bit of diversity there would be nice.  To be fair, I have been told to try their baby octopus dish (which is very Basque) but it wasn’t on their menu tonight.  Our favorite dish of the night (Wild Mushroom Arroz) felt more Italian than Basque and the dessert was entirely forgettable which is so disappointing with so many delicious Basque dessert options they could be serving (Arroz con Leche, , Torrijas, Pastel Vasco, Leche Frita, etc…).  All in all, Txoko has good food, don’t get me wrong…but if you go there expecting truly Basque food you will be disappointed. 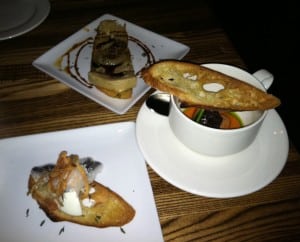 Okay, so the Pintxos clockwise from the top dish in the photo…

“Liver & Onions” –  Foie Gras Torchon with Meyer Lemon Gastrique & Caramelized Onions
This almost worked.  The caramelized onion and lemon gastrique were diving and the foie gras was super rich and delicious.  The one big miss though, is that the Foie was not layered across the toast evenly so some bites had none while others were overwhelmingly rich…even for a Foie-lover like me!

Olive Oil Poached Ahi Tuna with Oven Roasted Tomato Puree, Black Olive, Chive Oil
Probably one of the more complex dishes we had all night in terms of layers of contrasting flavors  However, the olive oil and olive flavor was a bit much – too heavy handed.

Boquerones with Egg and Crispy Fried Shallots
This was the most Basque of all of the pintxos that we had…nice fresh anchovies.  I would have soft-boiled the egg instead of hard boiled it though. 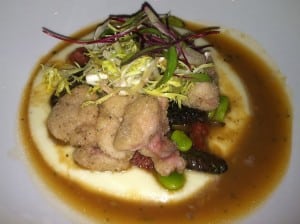 Crispy Sweetbreads with Potato Couils, Sherry, Fava Beans, Wild Mushrooms, Chorizo & Cress
Yes there is sherry and chorizo in this, but that still doesn’t make it Basque!  In theory this dish sounded great but in the end it really just felt like the sweetbreads were completely out of place and added just for effect.  They added absolutely nothing to the dish’s flavor profile and in fact I felt like they took away from it because they just felt so random.  They also were some of the chewiest sweetbreads I ever had…if this had been my first experience with them I would have likely been turned off forever.  Sweetbreads aside, the rest of this dish was actually pretty nice…my only complaint being that it was overly salted, especially when you got a bite of chorizo. 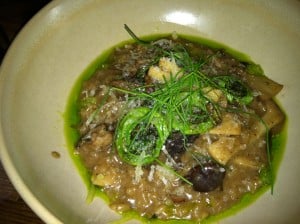 Wild Mushroom Arroz with Chanterelles, Hen of the Woods & Fiddlehead Ferns
This was our favorite dish of the night….but I have no idea what is Basque-inspired about it.  Nice intense and multi-layered mushroom flavor with the fiddlehead ferns being the perfect element to brighten up the dish. We all know risotto isn’t easy to get right so the fact that the rice was cooked perfectly with a nice subtle bite but the overall texture was still creamy really made this dish. 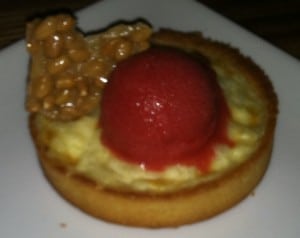 Rice Pudding Tart with Strawberry Sorbet, Rhubarb Compote & Pine Nut Brittle
As I mentioned earlier I was definitely disappointed with the lack of Basque desserts since there are so many good ones to choose from!  But since Arroz con Leche is one of my favorites, I was hoping this Rice Pudding Tart would be a fun play on that, but nope.  I don’t really have much to say about the tart….pretty unforgettable.  The strawberry sorbet was quite nice though, not sure if it’s made in house or not.  The pine nut brittle was the star of this dish though, yum.

So all in all, I’m convinced that the Naked Lunch Duo (Ryan Maxey & Ian Begg) can certainly cook…I’m just not convinced that they know a ton about Basque food so I find their chosen theme a bit odd.  Maybe I’m expecting too much and they are taking the whole “Basque-Inspired” idea more lightly than I would since I love this cuisine.  I’ve also seen menus from the previous 10 days and at times they do have some more interesting looking options that I was sad to have missed out on (grilled baby octopus and roast suckling pig for two).  I’m thrilled that they have Basque Cidra though and since I do really like the atmosphere of the bar area I’ll likely go back for drinks while I’m waiting for them to settle into the menu a bit more.  For now, I’ll continue to head to Pipperade or Bocadillos when I’m craving authentic food from my time in Spain…but I’ll certainly keep my eye on Txoko in hopes that I just had a fluke experience early on as they are working out the kinks.

Have you been yet?  Did you have a different experience or perspective?  If so I’d love to hear from you!