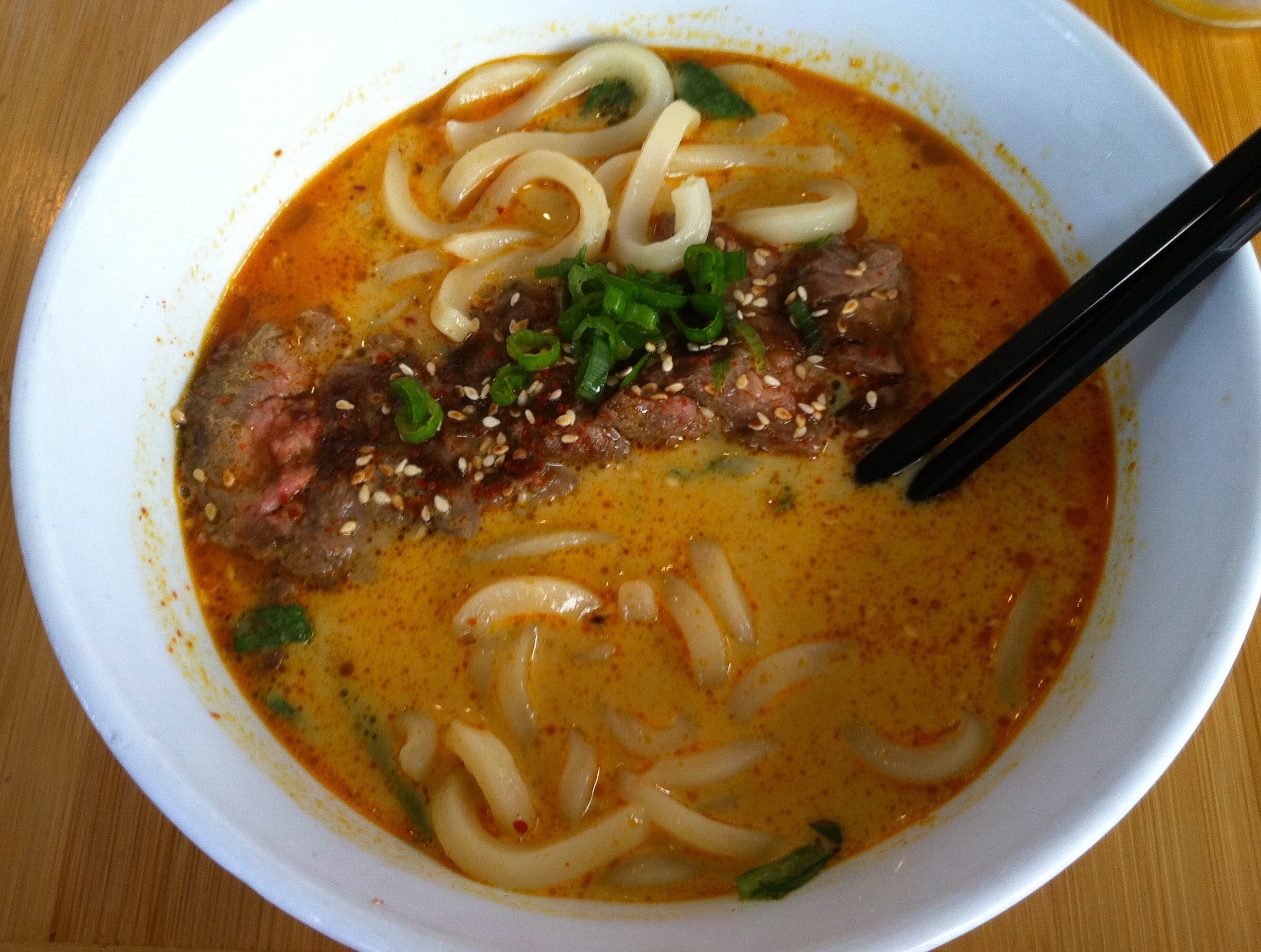 I can’t believe I haven’t written about Noodle Theory yet.  I almost cried when the one in my neighborhood went out of business and now I have a hard time eating anywhere else when I find myself near the one location in Rockridge.  So to be clear, I LOVE Noodle Theory.  I think my love is two-fold.  First and foremost, I am kind of obsessed with noodles, especially when served in a soup.  I crave them at least weekly…particularly Udon, but really any noodle with an Asian-inspired broth will do.  Second, I don’t like to feel guilty about my noodles.  So greasy noodles with poor quality meat or barely identifieable vegetables just won’t do.  I like my noodles to be dressed up with high-class, respectable ingredients.

You would think in a city like San Francisco with such an deep Asian history and influence, noodles like this would be pretty easy to find.  But I tell you, that just isn’t true.  I still haven’t found a go-to place since the Noodle Theory in the Marina closed!  So my noodle craving often goes unsatisfied…unless I make them myself which still just isn’t the same.

First – let’s clear something up.  You may think that since Noodle Theory didn’t make it in San Francisco it may not be all that good after all.  False.  I truly think it was due to their location and their lack of advertising.  I just don’t think that many people knew they were there!  So technically it was a prime location right off of Chestnut on Scott Street, but even the famed Kara’s Cupcakes makes sure to always have a little billboard on Chestnut Street to get people to walk up to her spot….and Noodle Theory never did that.  So every time we went in there (often for take-out) it was pretty empty and we knew it was doomed.  There have been many other restaurants in that very same location, so I think it’s one of those unfortunate cursed spots.  Good luck Cedar Hill (who is now in the old Noodle Theory spot)!

When we go to Noodle Theory we typically skip the appetizers and head straight for the noodles.  Not because the appetizers aren’t good…they definitely are (especially the edamame and hand-wrapped dumplings) but because they give you big portions of the noodles and we want room to fit them all in.  We don’t ever have leftovers to bring home from Noodle Theory!  We like both the Soup Noodles and the Saucy/Sauteed Noodles…but tend to stick with the soup ones a bit more often, just because the broths are so ridiculously good.  When we do have the Saucy/Sauteed Noodles though, we really like the Fulton Valley Chicken over Ginger Noodles with Crushed Peanuts and Pan Seared Duck Breast over Noodles in a Thai Red Curry.  But our true favorites are the following two Soup Noodle dishes:

So next time you find yourself in Rockridge (or as in our case…anywhere in the East Bay!), make sure to stop by Noodle Theory for some high quality, noodles in delicious, unique broths and sauces.  But be careful…I just know you’ll find yourself starting to crave them more often than you can have them like I do!  If I’m missing out and you have a favorite noodle spot here in San Francisco, please, I’m begging you…tell me about it!  I need my fix more often than I can make it over to Rockridge!!