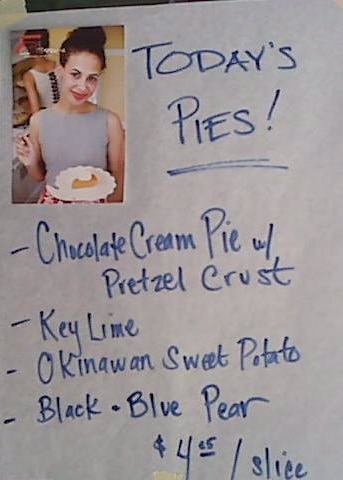 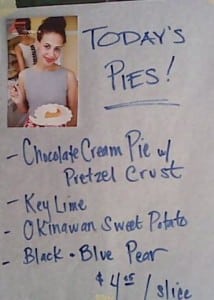 Who doesn’t love a Pop-up Pie Shop?  Seriously…what a great idea.  I have to admit, I’m definitely more a pie-gal than a cake-gal anyway, so the fact that PieTisserie has “popped-up” right around the corner from my work for the entire summer is dangerous.  Bikini season ain’t looking so good!

PieTisserie’s owner, Oakland resident Jaynelle St. Jean, has been making pie for years…first starting out by staging a window of her mother’s home and giving away slices to friends of the neighborhood.  She must have quickly realized she was on to something as she soon set her mission to fill the need for unique and delicious pies, or, Random Acts of Sweetness as her tagline proclaims.

While Jaynelle has been selling pies for the past year or so (via events, etc…) this is her first storefront.  She is essentially renting out a window of a downtown Oakland restaurant (1015 Clay) and selling her pies right through the window.  Jaynelle has a quaint, cute old-fashioned style that’s reminiscent of drinking Country Time lemonade on grandma’s front porch.  She’s extremely friendly and is happy to chat you up about her pies and pop-up adventure that has her baking pies every single day for the very first time.  Since she is still early on in her pop-up role (day 3!), be sure to get there early as she’s sure to run out of pie by the time the lunch rush is over…especially as word spreads. 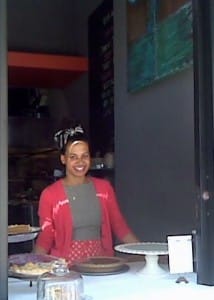 So…on to the important stuff.  How is the pie? My friend Jen and I went over together and since we knew the hubbys at home would want some we had a great excuse to try all 4 flavors of the day.   Specifics are below but at a high level I would say Jaynelle makes good homemade pies.  Good, but not great.  But to be honest, it’s not that easy to get a piece of pie on your lunch break so she has a unique niche and the pie is certainly good enough to fill a craving without having to go through the trouble of baking a whole pie yourself.  From my experience with these 4 pies, I would place my bet on her root/nut pies and her fruit pies rather than her custard or cream pies.  For a dedicated pie-maker, I would also say the crusts are just good…and some had slight textural issues in my opinion.  And as we all know great crust is the key to great pie! 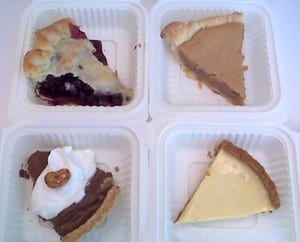 From bottom right in photo, clockwise:

Key Lime Pie – The look and texture of this pie is exactly what you find in Key West, Florida.  So for those who are used to the thick fluffy (or God Forbid gelatinous) Key Lime pies it may look a bit wimpy, but it is authentic in look and feel.  Taste is a bit of a different story though.  While you certainly expect it to be tart, it actually goes beyond that and instead is bitter…like that back of the throat bitter from the pith of a lime or lemon.  So needless to say, not my favorite.  Graham cracker crust was pretty good though, not greasy like they can sometimes be.

Chocolate Cream with a Pretzel Crust – The filling is a nice dark chocolate, nice and rich but not too sweet.  As a true salt-lover, I have to say I was a bit disappointed with the crust (I mean when you call the crust out in the pie title I’m expecting to be wowed!).  So while the crust is a bit saltier than a graham cracker crust it doesn’t give me the intense salted pretzel taste I was hoping for and it was slightly softer than it should be for a crust with a cream filling in order to deliver the textural distinction you need.

Black & Blue Pear – This was my second favorite…you can taste the freshness of the fruit along with a nice hint of nutmeg. The surprisingly nice thing about this pie is that it doesn’t have the strong tartness that many berry pies do, likely due to the smart addition of pear.  Probably the best crust of the bunch too…flaky and buttery.

Okinawan Sweet Potato – Rich yet light and intensely spiced….deliciously good.  This was my favorite, by far!  It had a good punch of ginger along with many of the other cinnamon, nutmeg spices that you would expect.  It has a lighter, almost whipped texture vs. the dense texture of a traditional sweet potato pie.  My only complaint is that the crust is a bit papery and chewy…instead of flaky or crisp.

So all in all, my bikini-season is probably relatively safe as I won’t find myself there super regularly.  However looking at her complete flavor list (she advised that while she loosely tries to stay seasonal she mostly bakes what is striking her fancy each day and/or what seems to be really selling) will certainly have me stopping by when I’m in the area to see if some of the others I want to try are in the window.  The ones I’m most looking forward to trying are: Mixed Stone Fruit, Raspberry/Chocolate Crust, Beet, Yam-Ginger and Pecante.

Have you tried PieTisserie pies?  If so, what do you think?  Which flavors are your favorites?