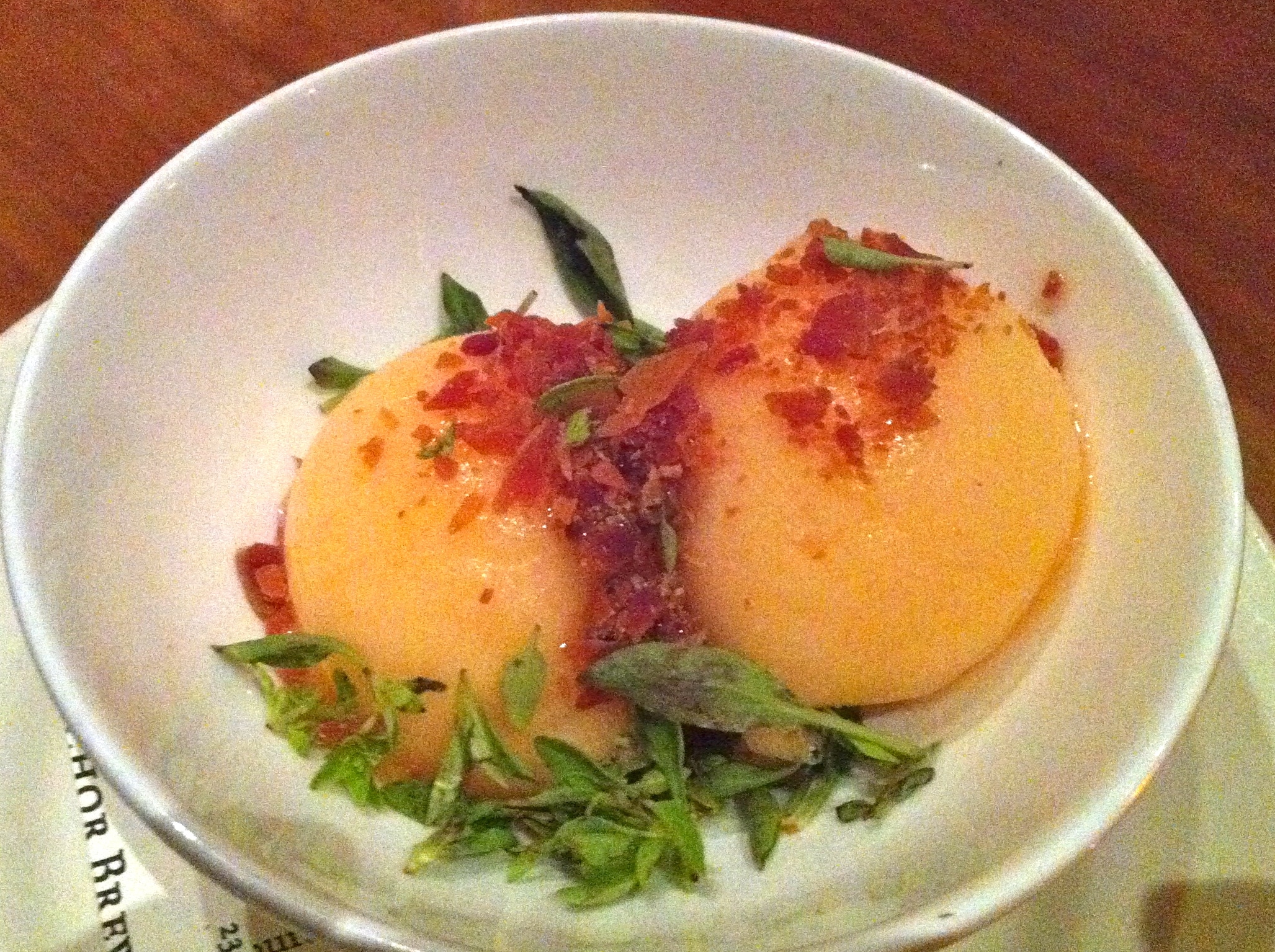 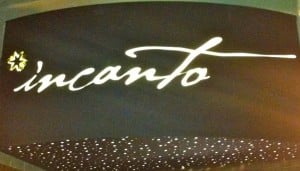 I’m embarrassed to say that I’ve lived in San Francisco for almost 5 years and last night was my first time eating at Incanto. I’ve heard so many good things about executive chef Chris Cosentino‘s food (and have been following his career for a while) that I was honestly a little worried Incanto wouldn’t live up to the hype I had built up in my mind…but not to fear, Cosentino’s food and my first Incanto experience absolutely delivered!

If you don’t know much about Chris Cosentino there is one important thing to note in order to be prepared for the Incanto menu.  Chris is a big part of what I will call the “whole animal” movement…meaning he is passionate about using every part of the animal in his cooking.  Snout to tail if you will, including all of the delectable organ meats that I personally love so much.  Take a quick spin to his site, OffalGood for all of the delicious and gory details on his work in this area.  For me, and my dining partners for the night, this was very exciting and we tried our hardest to sample as much as we could on our visit.

The ambiance is warm and inviting, softly lit with a feeling of being in a good friends living room.  While we waited for our friends Christian and I sat at the bar and had a drink and a nice chat with the bartender.  We were also able to see Chris Cosentino in action with his staff preparing for the busy night ahead….and the bartender hinted that reservations would be even harder to come by in the near future.  I asked if that had anything to do with Chris’ online pilot perhaps getting picked up by a network, but mum was the word so I guess we’ll just have to wait and see.  But with that little tip I advise you make your reservations for Incanto now! 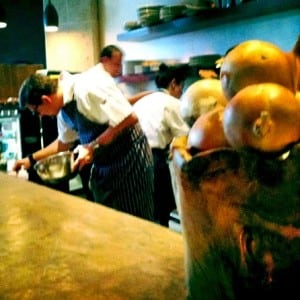 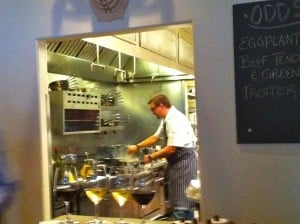 The Mystery Wine flight treated me to rather generous tastes of 3 fabulous Italian wines for only $16.  While I’m typically prefer red to white, the white in my flight (Inzolia 2009 Cantine Barbera) was phenomenal.  The bar was relatively empty for 6pm on a Saturday night which afforded us great attention from the staff and a preview to many of the dishes coming out of the highly energetic kitchen and salumi station.  I will be back soon for another seat at the bar and one of their fantastic looking Boccalone salumi plates (which come in 3 different sizes – piglet, sow & boar).  Okay, on to dinner!

Once Renee & Matt arrived we were immediately shown to our table right in the center of the dining room.  The service was prompt and attentive, although for friends chatting and catching up we were made to feel a bit like bad children for not being ready quickly enough with both our appetizer and main course orders.  I’d much rather have overly-attentive, albiet somewhat pushy, service than slow non-existent service any day of the week though.  Our waitress did steer us in the right direction by going the family style route rather than  each of us getting our own meals…this allowed us to try a rather wide range of dishes as you’ll see below:

The beef tendon, chili & green beans appetizer special was a huge hit at our table…the consistency of the tendon was honestly almost like a wide glass noodle, as Renee so rightly pointed out, and the flavors reminded us all of a delightfully spicy Pad Thai.  We were told that the consistency of the tendon was achieved by freezing it first and then shaving it into thin strips…who knew tendon was so delicious?  First taste at Incanto…hit it right out of the park! 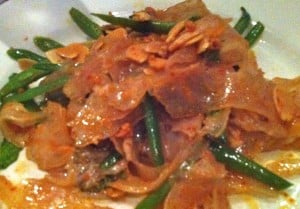 We also decided to try a second appetizer special…the trotter cake with snails and fresh horseradish.  I’ve had trotter cakes before, but honestly this might have been one of the best ones I have ever had.  Often times the pig’s foot is shredded up so finely that it no longer resembles pig’s foot at all and almost has a crab-cake consistency.  But the Incanto trotter cake was loyal to the main ingredient, filling the cake with large and delectable chunks that were perfectly seasoned and fried.  While the cake alone would have fully satisfied me, I have to say that the addition of the snails and fresh horseradish along with the micro-green salad really drove this dish over the top…even for Christian who typically doesn’t like snails!  The snails had an appropriately chewy texture and almost tasted smoked or an essence of morels or something intensely flavored like that.  Utterly delicious (although bad photo…sorry)! 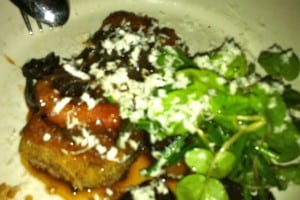 Next up, the last appetizer of the evening.  Back fat with new potatoes and capers.  This one sounded too intriguing to pass up and boy am I glad we tried it.  While the texture was a bit too soft for some at the table, and I thought it would be for me as well by looking at it when it arrived, it was actually fabulous!  Now to be fair…you have to get over the fact that you are slicing up and eating pure fat, but however Cosentino prepares it takes it to a whole different level which allowed me to forget that entirely and just enjoy the depth of flavor and unique texture.  Lovely. 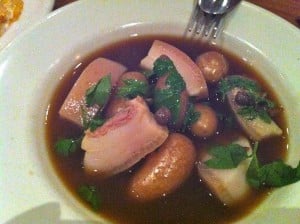 Now the interesting thing about Cosentino’s preparation of all of these dishes is that at this point, as we were waiting for our entrees, Renee said something along the lines of “I was expecting a bit more heavy handed organ meat or strange foods here,” and I had to respond…”um, so tendon, pigs feet and back fat are on the normal menu at your house?”  Which we all quickly agreed that , yes we had been eating unique foods all along, but for some reason it didn’t seem strange at all.  The point to me telling you this is to highlight that Cosentino is elegant in his preparations so that his use of unique animal cuts isn’t heavy handed or trendy at all.  It is pure, honest delicious and rustic Italian cooking with a full appreciation of the whole animal.  Incredible really.

For the main courses we split 2 small grain dishes and 1 entree.  The cappellini with sea urchin, while looking a bit like a gloppy mess that had been left under the warmer for too long, was exactly what you would expect if you’re familiar with sea urchin.  A tender pasta with a strong fruit of the sea taste…if you don’t like fish flavor you won’t like this, but it really is quite unique and showcases the sea urchin beautifully. 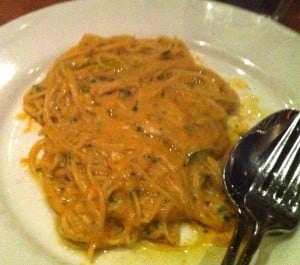 The chanterelle & chard farroto was a nice wholesome break from the strong flavors and meat before we got to our final entree.  A nice play on risotto with perfectly cooked and delicious chard. 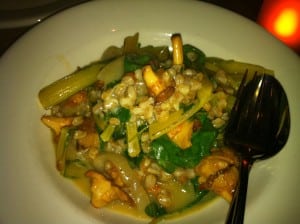 Last, but certainly not least for our entrees was the Pork Belly with corn, heirloom tomatoes & onion.  Honestly, I’m not a good enough writer to describe how good this was!  I think we were all secretly furious that we had to share this one…I mean Matt had to take a moment  of silence after his first bite to recompose himself!  I mean, I’d be hard pressed to tell you a time when I haven’t enjoyed pork belly, but this might be the best I’ve ever had.  It was so tender but the outside was crisp and almost candied in taste and texture…oh, and the tomatoes and slightly caramelized onion and corn were such an amazing taste of summer.  Perfectly seasoned and a great balance to the rich pork belly.  Divine. 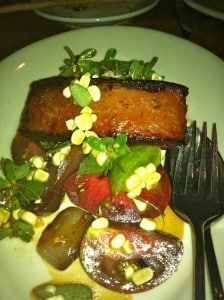 Now, of course, we had to try some dessert.  Matt and Renee were intrigued by the douglas fir ice cream that came along with the blueberry-peach upside down cake.  While the Savory in the SavoryGirl absolutely had to try the melon sorbet with Benton’s ham and basil…assuming that it would be a delightful play on the popular prosciutto and cantaloupe appetizer that we love in our house. 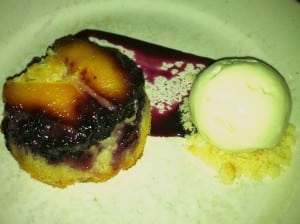 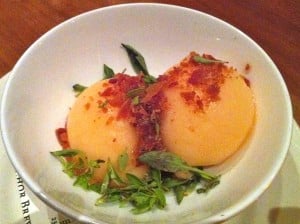 While both desserts were delicious (along with our two dessert wine tasting flights, including one of my favorites, Malvasia!)…we all were hoping for a bit more pine-flavor in the douglas fir ice cream.  The melon sorbet with ham & basil, however was a clear winner.  Renee even mentioned ordering a second one for them, and I don’t think she was joking!  It was out of this world, so simple yet so delicious.  I could eat that all day, and I’m typically not an ice-cream/sorbet kind of gal.  The subtly sweet and icy cold melon sorbet contrasted with the crispy and salty bits of ham accented with the herbacious and slightly woodsy small basil leaves.  Just amazing…I will 100% be trying this out myself at a dinner party in the near future!

So my final words of advice?  Run, don’t walk to Incanto now if you haven’t been.  My birthday is coming up in a few weeks and I’m honestly considering going back again for that.  And you know me, I have a really hard time going to any restaurant more than once since I always want to try new places.  If you have a large group they also do “leg of beast” or “whole pig” dining that would be a fun communal experience, but be sure to book those in advance.  And really, for food this good the prices are extremely reasonable.  For four people we had 1 $50 bottle of wine, 1 beer, 1 glass of wine, 3 appetizers, 2 small grain dishes, 1 entree, 2 desserts, 2 dessert tasting flights and 1 coffee for $260 including tip.  Christian and I have spent $130 on much less food/alcohol and of much lower quality…so really, phenomenal food, beverages and atmosphere at reasonable prices for San Francisco.  Run, don’t walk…make your reservation now! 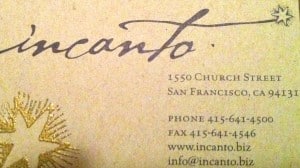 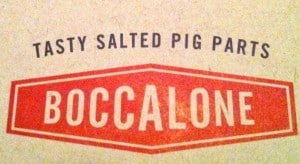