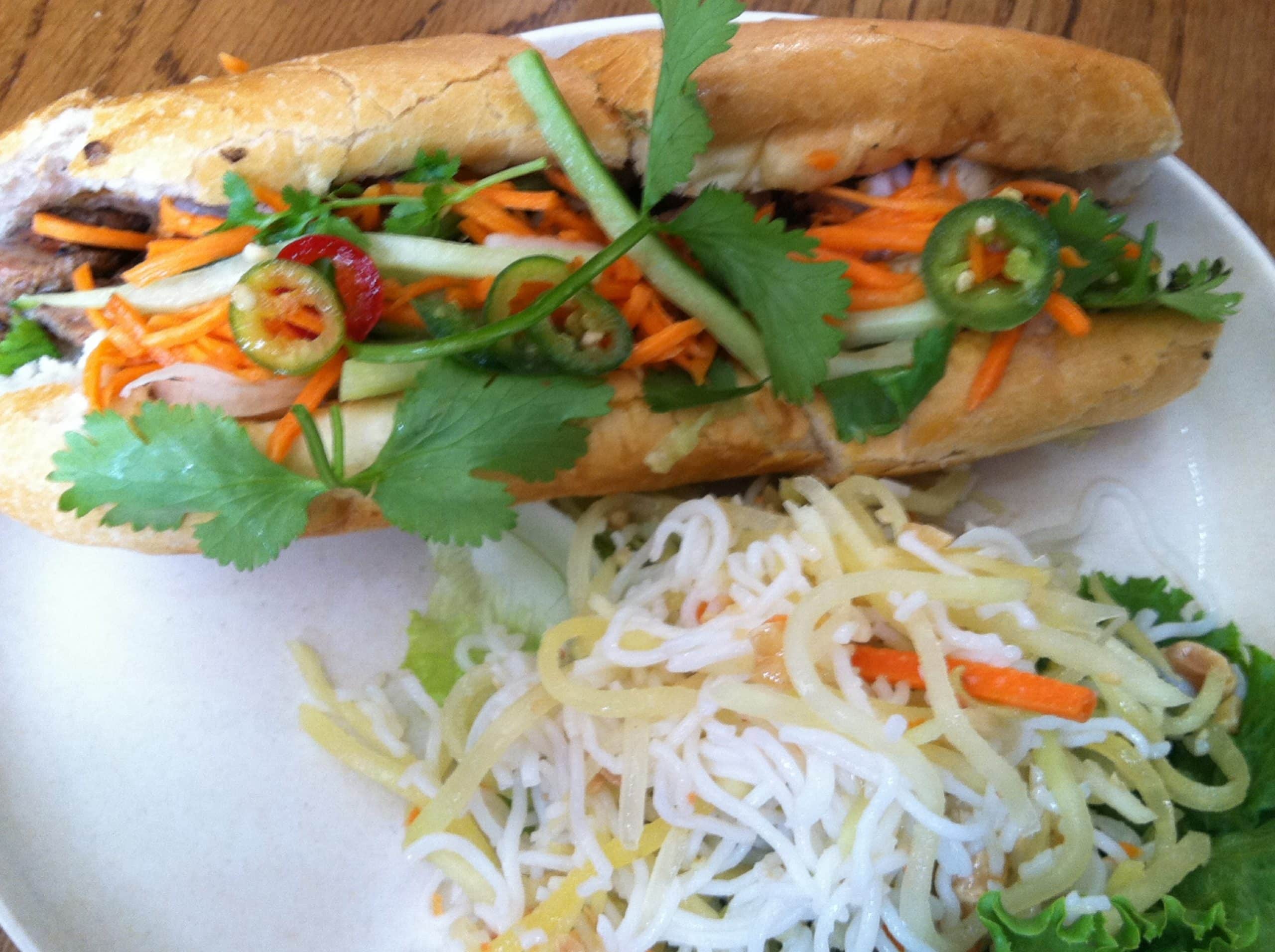 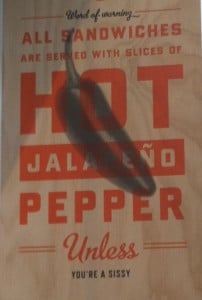 So when Bun Mee  (a phonetic interpretation of the name of the sandwich banh mi) opened up a couple of months ago on Fillmore we were excited to have a Vietnamese sandwich shop relatively close again…but it took a little while for us to try it out, which isn’t always a bad thing with new places!  So upon entering I liked what I saw…cute, simple interior with a nice big menu up on the wall and a sassy poster making fun of the “no jalepeños” crowd behind the counter.  While there is limited seating I do like the counter seating near the back that allows you to be front and center watching the food being prepared right before your eyes (but that’s always my favorite seat in the house).

I ordered the Roast Pork sandwich ($6.25) since I consider that a classic that I can compare to other sandwiches I’ve had and Christian ordered the Grilled Five Spice Chicken sandwich ($5.95).  We also got a side Green Papaya ($3.50) salad (since we recently returned to Thailand and keep trying to find one similar to those we loved there),  a House-made Kaffir Limeade ($2.50) & an iced Vietnamese coffee ($3.50). 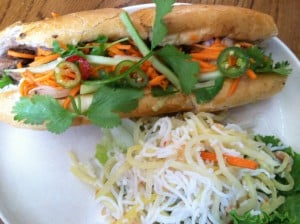 So, how did they stack up to Saigon Sandwiches?  Well for one they’re about double the cost…but to be fair they are slightly bigger and still super cheap for lunch in the Fillmore so that’s a wash.  In terms of flavor they are pretty darn good, but for some reason the delicious mix of flavors from all of the condiments didn’t seem to come through as sharply as they do at Saigon.  The daikon and carrot didn’t have as much crunch as I like and the sandwich was a bit dry for my tastes.  Possibly because Bun Mee uses healthier, higher quality meats, but they need to offset that with something to make up for the lost grease that usually moistens the bread ever so slightly.  While Christian’s Five Spice Chicken sandwich sounded somewhat exotic, we didn’t really taste much punch with the five spice blend so I do think they could kick that up some.

Now, anyone who knows anything about a Vietnamese sandwich knows that the bread is one of the most, if not the most, important ingredients.  Bun Mee’s bread is good…nice crunch on the outside with soft tender bread inside.  But I was a little disappointed to find out that they get their bread from a bakery in San Jose…I know it’s not that far away, but really there are no bakeries good enough in San Francisco to provide this new eatery with their most critical ingredient?  Okay, I’ll get off my soapbox now!

Everything else was good as well.  While the papaya salad didn’t have the fiery Thai kick we love it was a delightfully crisp and crunchy salad.  The house-made kaffir limeade tasted a bit like, well, limeade.  Not too tart but not too sweet, refreshing.  Lastly, Christian truly enjoyed his iced Vietnamese coffee to go although it was a bit bitter to me, almost as if they added chicory to it.

So all in all, I would give Bun Mee a solid B+, maybe an A- considering how affordable it is in an otherwise pricey neighborhood.  I look forward to trying out some of their other sandwiches (especially the Belly Bun or the Sloppy Bun with an added egg).  Their salads, particularly the Caramel Citrus Rice Bowl, also intrigue me so it looks like I have a few trips to Bun Mee in my future!

Oh – and don’t miss out on the House Made Coconut Cooke Sandwich as we did…I’ve read lots of good things about it!