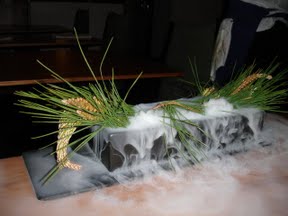 Atelier Crenn is a relative newbie to the Cow Hollow end of Fillmore Street (in the old PlumpJack Cafe location) having only opened their doors in January of 2011.  While I don’t typically do restaurant reviews, Atelier Crenn is a unique enough experience that I thought I would share.

Atelier Crenn is the brainchild of Dominique Crenn (you may recognize the name from her Iron Chef win or her three Michelin Stars). Dominique spent her childhood in France and her French upbringing is certainly seen in her cooking.  The name of the restaurant references her father’s workshop Atelier Papa Crenn and his artwork can be found in the restaurant.  If you venture for a visit, be prepared, it’s an expensive night out even without alcohol.  The Chef’s 8-course tasting menu cost $115 (four-course menu is $72) with beer/wine pairings running you an extra $70. Since I was with two friends we opted to simply buy two bottles of wine instead (at roughly $60 each). So at the end of the evening the damage was about $180 including tip.  Each.  And to be perfectly honest, your not exactly full after 8-courses of “Poetic Culinaria.”  But it is a unique and entertaining evening that is different from most anywhere else I’ve been in San Francisco… consider it dinner and a show all wrapped up into one.

“Icy” Split Pea Soup – Spoons of what appear to be green ice quickly melt in your mouth to taste like split pea soup.  Fun, but a bit underwhelming on flavor

Kir Breton –  this was interesting.  A take on the Kir Breton cocktail, but in a bite-size morsel. Apple cider encased in a crisp white chocolate orb with a creme de cassis reduction.  Make sure your mouth is closed before you bite down..the liquid inside shoots right out!

This was divine…the oyster melted in your mouth accompanied by it’s natural liquor and lovely smoked sturgeon pearls.  The shrimp may be the best shrimp I’ve ever had…the rich flavor sucked out of the shrimp head and the perfectly if almost under-cooked shrimp body.  It was so good we had to check with the waiter to find out of our assumption was right (which proudly it was)…these shrimp were cooked using the sous vide which led to the amazingly tender texture and fabulous flavor.  Wow.

I LOVE me some foie gras!  So I was excited to see how Chef Crenn was going to take one of my indulgent favorites and kick it up a notch.  Sadly to say I was incredibly disappointed.  It looked beautiful and the candied kumquats along with the foie gras was a great contrast (which I will be sure to copy myself in the future!) but the foie gras itself was boring, too dense and really the only dish all night that I can complain was served as just too big of a serving.  This preparation just reminded you that you were eating something really fatty and awful for you.  Took the fun right out of the foie!

This was the second winner of the night.  I’m not sure why soup is in quotes on the menu because it is indeed a soup…perhaps because you get served a bowl full of the smoked farro, meaty morels and wildflowers and then the waiter comes and pours the miso mushroom consommé over it.  I’m a huge soup fan (so much so that I’ve been known to get cans of soup in my Christmas stocking!) and this was a delicious soup.  The smoked farro was pure genius, providing a crispy nutty element.  This rich earthy mushroom soup just leaves you hoping for a rainy day to snuggle in front of a fireplace.  I REALLY wish they would do large orders of this one dish for take-out since I live so close…I would get it often!

Time for a palette cleanser!  This was quite nice…not a throw-away palette cleanser (like I often find they are) at all.  It echoed the same inventiveness and complexity that you found throughout the menu with layers of cucumber and herbaceous micro-greens

This was really good…but a bit forgettable to be honest.  So I don’t really have much more to say on this course other than the fish was cooked perfectly and the accompaniments complimented the fish nicely.  Really good, but not great.

Mmmm, pork belly.  I mean can you really go wrong with pork belly?  Not in my opinion, so this was pretty great…but mostly because it featured pork belly not because of any unique preparation or flavor combinations (kiwi) in my opinion.  I was also just in Thailand and didn’t see one kiwi while I was there….doesn’t mean there aren’t Thai kiwi, but the name of this dish and the execution confused me a bit.

This was quite delicious and for some reason felt like a very seasonal dish to me…the veloute was perfectly prepared and it all just worked together quite well.  The pigeon was some of the most tender I’ve had.

They failed to offer this to us even though it is on the menu and very clearly an option as a part of the Chef’s Tasting Menu.  When we realized this a bit later (after our first dessert course) we were not amused…some serious cheese lovers in this party.  This “oversight”, I believe,  was also the first of several slight nudges from the staff that we were taking too long enjoying our courses and a hint that they wanted to rush us out (ridiculous at $180/person in my opinion).  More on this to come…

Time for our last palette cleanser, and a very fanciful one at that!  It’s these types of presentations that make dining here such a unique experience.  A bit showy?  Yes.  Fun? Yes.  Pine gelato balls with a side of liquid-nitrogen smoking pine for effect

I’m having a bit of a hard time remembering this dish, except for the vague fact that it was a nice mixture of briny olive flavor combined with a touch of sweetness, salt and earthy mushrooms (?).  It was one of those dishes that you keep taking bites of trying to figure out if you like it, but continually going back for more.  I believe one of us may have even licked the serving log…we made sure no one was looking though!  Really yummy, but clearly complex enough that it was a bit hard to parse apart and remember clearly!

Last, but certainly not least, the pastry chef, Juan Contreras, kept up his record of unique plating by bringing out a mixture of hand-made candies surrounding a bonsai tree.  A bonsai forest of candies, if you will.  Hansel & Gretel would have been thrilled! Alongside the bonsai tree was a slate slab that had three mirror thin slices of dark chocolate and chili powder to finish off after we had tried all of the candies.  The chocolate, especially the thin texture, was divine.  The candies were good, but really only the salted caramel made my eyes roll back in my head….as any good salted carmel will do :)

So, our unique dining experience at Atelier Crenn was coming to an end.  We were one of two last remaining parties (our reservation was at 8:15).  Our bill appeared while we were still finishing dessert, with no offer of coffee or anything else and then soon after our coats appeared from the coat-check at the table next to us.  Clearly the staff was signaling to us that it was time to leave…a signal that I felt quite rude given the expense of the meal and the fine dining atmosphere Atelier Crenn is trying to cultivate.

In summary, only two out of the eight main dishes were great in terms of flavor (Oyster dish & Morels Soup) and three out of the eight were great in terms of presentation (last palette cleanser, olives & mignardises)…it would be nice if the ratios were a bit higher and the flavor/presentation greatness matched up more often.   The complexity on the beautifully landscaped plates often need a high level of waiter interaction…so if you like to be left alone throughout your meal this may not be the place for you as you would likely be missing some key elements without the thorough explanations.

So at the end of the day, would I go back?  Likely not.  Not because the food wasn’t good…but because the food wasn’t great and for $180 total the food and the experience needs to be great in my book. However, it is a really fun culinary experience to do once so I don’t regret going there at all and would encourage others to try it out.  If you do go, I would probably advise the four course menu over the full tasting menu as I imagine you will still get the fun of the experience without completely breaking the bank.  And go with true foodies or artists. Others may have a hard time appreciating the blurred lines between art and food…not the place to bring your meat & potatoes boyfriend!

Have you been to Atelier Crenn?  If so, what did you think?

Note: All photos in this post taken by my friend Louise…a big thanks for having a better camera with you than I did (uber-dim lighting) and for sharing!